Last night was the coldest this winter, it may have even been the coldest of the year at –5.6°C which left the cut well frozen this morning and as we were only going to Stone were in no hurry to leave. Just before 11 I started the engine and was making ready to leave when an Anglo Welch hire boat came steaming through the bridge towards us, they had come all the way from Stone and broken a nice passage all the way. Although last night was colder and it was not so bright this morning it wasn’t long before it started to thaw and things were dripping wet. If it had remained cold all day it may have caused problems tomorrow as in places the broken ice was 10mm thick.

Barlaston Boatyard has a rather nice private mooring with a lift bridge across the entrance and room to moor just two boats. 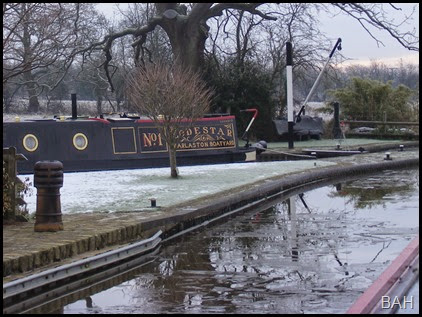 in the garden he has a pair of lock gates set up in the lawn and its a good place to show off his plastic sheep.

With the thaw setting in but still very cold in other places icicles had started to form in some places like under this bridge. 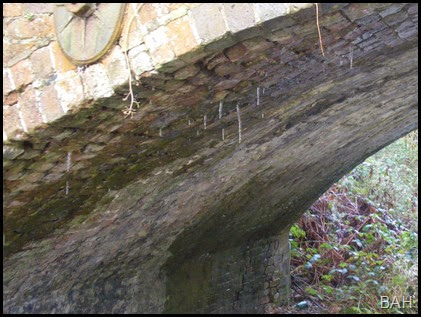 When we arrived at the top of the Meaford we found the lock empty so there must be someone a short way ahead of us, as we left the top lock there was a boat coming up about to leave Meaford Road Lock so hopefully he will have turned everything for us. I waited where the old flight of locks use to rejoin the new 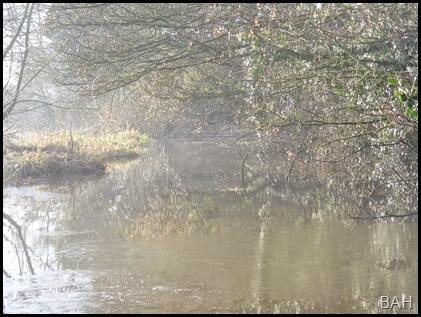 line of the canal. The boat ahead must have been closer than we thought as all the other locks were against us including those in Stone.

The foot bridges over the tail of the locks here on the Trent and Mersey canal still have the decks in two parts with a slot left between them where the tow rope would have gone when the boats were towed by horse. 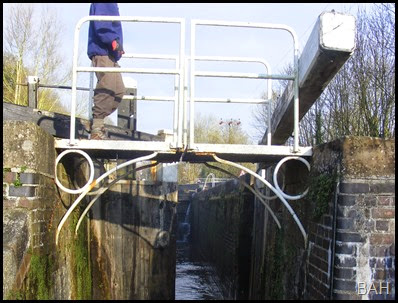 Another feature still standing is the posts that were erected to protect the bridges from the how ropes as the horses pulled the boats through, the ropes would cut large groves into the brickwork so on the corners some form of protection was fitted, on the Caldon we saw hard wood, some places have rollers, most common is a strip of iron on the brickwork, but here there are 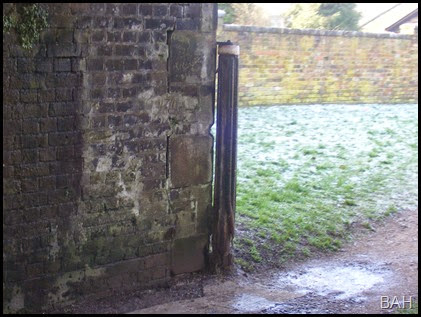 wooden posts with iron strips attached to them. It even looks as if the posts were made to rotate at one time.

We wanted to moor in town for the night if possible and there was just one space in the 24 hour moorings by the car park just above Stare Lock, it was also the end of the broken ice, so no one has used that lock today. 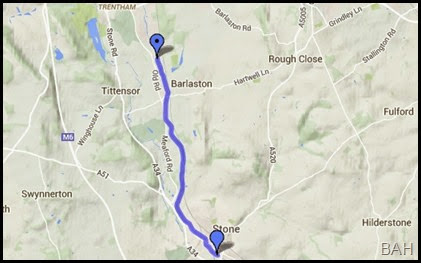