We decided to wait until the sleet stopped before setting off at 10 AM but it was still raining. I reversed back through the bridge  to the junction where Diana had the top lock ready for me to drop back down the Caldon canal.

There are three locks in the flight and it rained all the way down, but then stopped. We met a few dog walkers to wish Merry Christmas to.
At times the sun even peeped out for a look but there were always clouds in the distance.

Every boy wants a train set for Christmas and at Cheddleton we passed a big one, but there was no one playing with it today.

We met the only boat we have seen moving on this canal at Oakmeadow Ford Lock where we dropped down onto the river Churnet for a bit. They timed it right as Diana spotted them just as I started to move out of the lock. The river level was well down in the green and we were able to make good speed down to the Black Lion. We were making good progress until we reached Flint Mill Lock. The water was slightly down so I did what I normally do and put the bows against the top gate for Diana to top it up, I then just draw back very slightly so she can open the gate, at which point I drive in. Today I got just less than a third of the way in and stopped dead, we were wedged solid by a floating branch about 250mm long and the same round. The boat was held firm, I couldn’t knock the wood out of the way. We spent some little time in full astern, followed by ahead, repeated lots of times in quick succession before we finally started to move backwards. I really didn’t want to have Christmas dinner stuck in a lock.
However had I have stopped earlier and let Diana off to set the lock I would have been going much faster when I jammed and would probably still have been there.

At the bottom of Flint Mill Lock the C&RT have hung a PVC strip curtain to show the clearance of Froghall Tunnel. As you can see we just clear it. 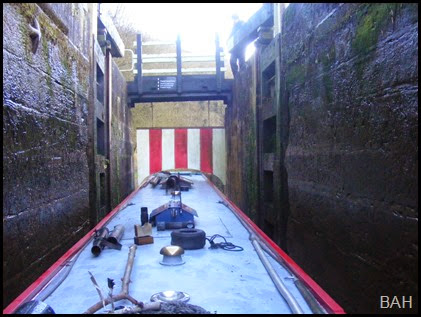 From here it is not far to Froghall Tunnel and there is a similar gauge curtain hanging there but some of the pieces are missing, 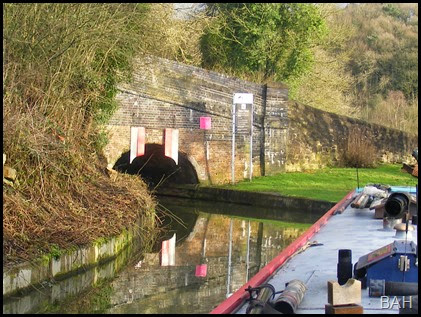 which is just as well because once the front of the boat passes under the curtain it is not possible to see where it is so without being able to see where the missing bits are you would have no view of the tunnel at all, as it is you cant see the front corners of the cabin which is how I again scraped the paint in the same spot as last time. 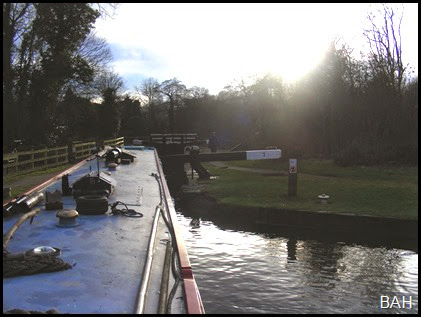 to the locks on your right that will one day take you to Uttoxeter at the moment they just drop to the basin, which is where we are moored for the night, we are the only boat in here on the finger pontoons. The blue line shows our route from the tunnel to the 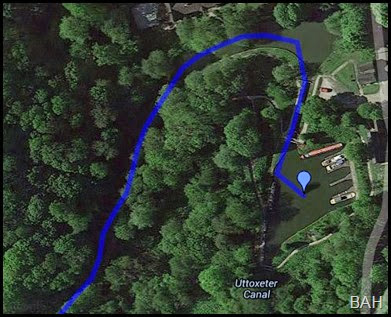 moorings.  Had we have continued straight on along the Caldon Canal we would have come to the terminus about 100 yds beyond bridge 55. You can see the Uttoxeter canal going off to the right.

So this is Christmas and we will spend it moored her by ourselves. The turkey is in the oven and the pudding has been steaming. Diana made our Christmas cake which we have already started on. 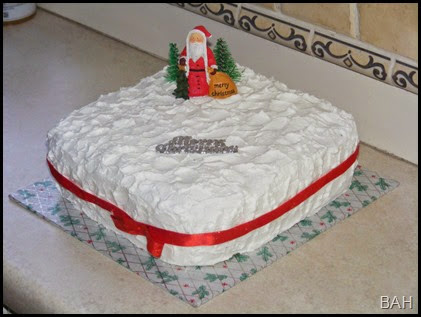 No sooner had we moored up and it started to rain again. 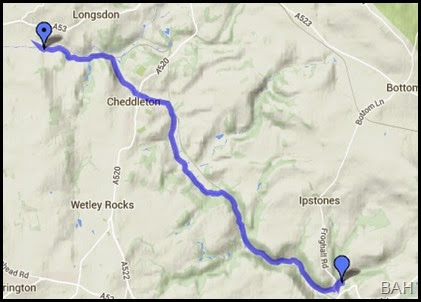 A very Merry Christmas to all who read these blogs.

What a great way to spend Christmas day. I wish nb valerie would squeeze under the tunnel.
Les

Thanks Les, have you taught that young lady what an English Christmas is.

All the Best to you both.

Do your travels take you North or South on your return to the T + M ?

One of our favourite moorings.