Well its been bit of a trial the passed 12 hours. Last night we were cold. It was -5°C and the Dickinson our only form of heat was not performing, so this morning that had to be sorted.
Firstly I removed the diesel feed to the control valve and virtually no flow. I had only changed the filter a few weeks ago, but I opened it it and it was all still spick and span, the oil flow from the tank to the filter was fine and also through the filter. I blew the oil back from the stove to the engine room and no blockages, put it all together as still next to no flow. I think the problem is the anti vibration loops I put in and air collecting in the top of them, after a lot of sucking and blowing, flowing oil in the wrong direction I finally got a mediocre flow, better than first thing but not as good as I would like, still we have heating for tonight. By now it was gone 12 mid day and we set off down through Star Lock, There was clear water behind us but about half an inch of 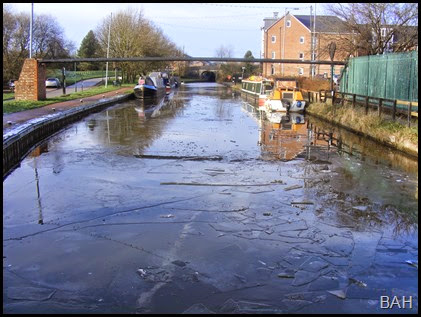 ice ahead. The boat moored in front came out and gave us some dirty looks as I slid passed him.

Below the locks the ice was worse and I got some verbal from one of the boaters moored there, thanking me for damaging his boat. Half way passed the moored boats the ice had been broken, we were on to a winner, but the broken ice only went just beyond the moored boats so someone must have moved up closed to the town. We pushed on breaking virgin ice that was between ¾ and 1” thick which we found a bit heavy going so we pulled over. We had been here about an hour when a boat came passed in the same direction as us, he got some verbal as well near the locks so we were ready to go again only for him to moor up in front of us for the night, he also thought it a bit heavy going. The outside temperature had been up to 8°C outside today and the forecast is for a warmer night and much warmer day tomorrow. 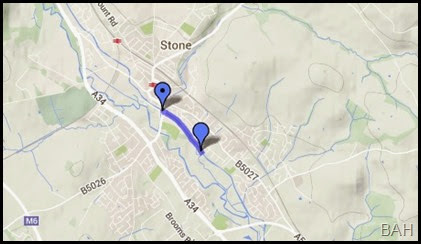