As we were moored outside we ate in the Toby Carvery last night as well as using their free WiFi. The canal had already frozen over when we returned to the boat and overnight it dropped to about
-3°. This morning was again bright and the three boats in front set off at 8-30 AM kindly braking all the ice as far as Etruria locks. I tried to get a photo of them leaving but the camera batteries decided they didn’t like the cold sitting by the back door all night.

We set off at 9-30 following the channel the others had cut. the ducks for some reason where waddling about on the ice, maybe they think its fun. 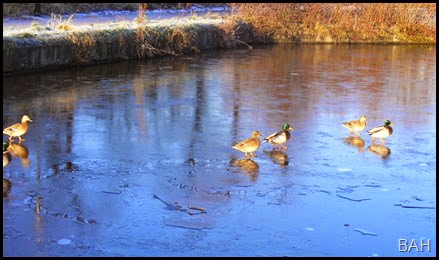 Bridge 117 has been treated to some heavy graffiti with every inch of the tow path side wall covered. 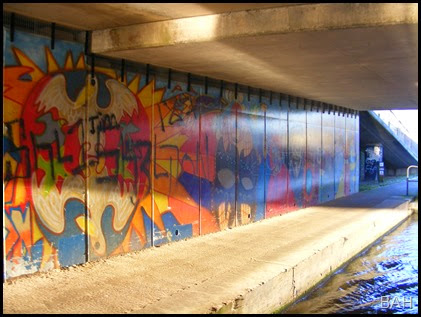 When we reached the junction with the Caldon canal at Stoke Locks we turned left and went up the Caldon for about 100 yards to fill up with water, it pays to keep the tank full in this weather as we could get stuck in the ice somewhere or the next lot of taps may be frozen. That job out of the way we backed up to above the locks and set off down Stoke Locks, the first two were with us but after that I had to fill them all. I worked the locks as it was quite icy and slippery around them. From here Diana was breaking ice, thankfully it was only about ¼” thick so not a problem. Not long after Stoke Bottom lock, just before the Dolphin we met a boat coming the other way, so now we both had a nice channel of broken ice to follow and he had all the flight with him.

We didn’t see another boat on the move until after we had moored up on the visitor moorings just above bridge, since then there have been several go by including the Bolinder engined Kangaroo. 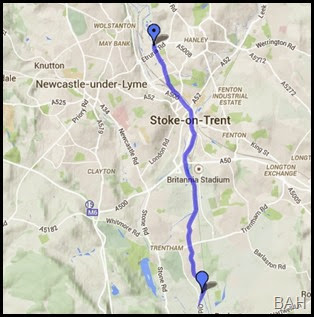 If you are eating out in Barlaston , walk up over the level crossing and turn left when you get to the village. Super pub with very good food along there. Can't remember the name but we went there in September and it was ace.

Last night was an eat out night Ann