Well following our blacking at Streethay Wharf (See my other Blog) we headed off to Fradley Junction, on the way we caught up with two other boats and we were only doing 2.5 MPH, Eventually the one in front of us overtook the front one but had to deploy fenders as the front one swung over and hit him as he passed. We caught up with the slow boat under the A38 road bridge and he pulled over and let me passed with no problem and a cheery smile so what happened when the other boat went by I don’t know.

We stopped at Fradley Junction to fill a very empty water tank and the Fradley tap is not the fastest in the world, it wasn’t helped when another boat arrived and started using the other tap. I had time for a beer and to go round with the rust treatment. When the tank was finally full it was off through the swing bridge that CRT have not got round to fitting a lock to and hard left into Fradley Lock on the Trent and  Mersey Canal.
Our timing was just right as a boat had just left the lock heading north and Diana was able to tell the volunteer lock keeper I was coming from the Coventry so the gates were still open.
To my surprise there was another volunteer lock keeper on Keepers lock but a boat ahead of us going down. The lock keeper said he had 30 boats through today plus what went through while he was at lunch. At  Hunts lock we were on our own which of course we had to turn and close behind ourselves.

It looks as if they plan to start selling diesel just above Common Lock as there is a large bunded plastic tank set up on the bank and a delivery pump still wrapped up near by. We didn’t meet any more boats, just that small flurry in Fradley. Half way between Common Lock and Bagnall Lock someone has done a lot of work on the offside moorings. 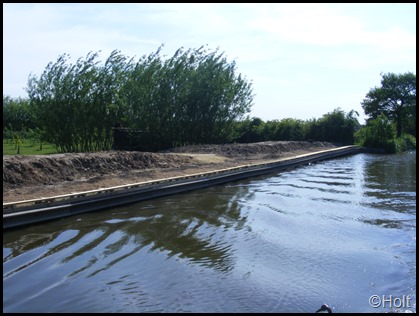 Down at Alrewas just above Bagnall Lock the sculptured living hedge is coming on really well. I will try to get further away for a photograph on the way back. 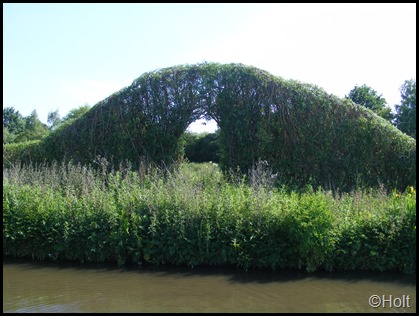 We had been told that Alrewas was deserted, this wasn’t quite true but there were a few spots left and we managed to get into one just before the foot bridge. Today has probably been the warmest this year, but the pressure has been steadily falling for the past couple of days and the forecast is not that great for the next few days.

PS. I have already scraped the black on the hull sides. 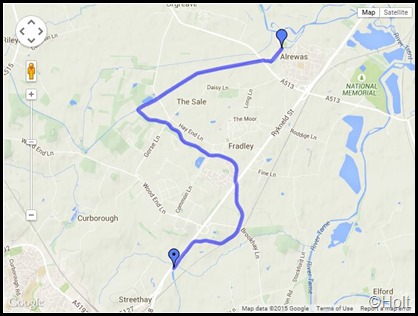