Its sunny today, hooray. First task a walk up to Tesco for a few things, its about ½mile. On our return all the other boats had left. We waited for one who came down the Caldon to pass before setting off backwards first for water and then back on to the Trent and Mersey canal. The reason for doing it backwards was that if I had gone forward to wind doing a 180° turn when I got to the junction I would need to do another 180° turn down the locks. What I didn’t know was the working pair that had moored behind us had just set off and they were pulling the butty backwards down the 2 lock to moor in the museum arm. As they went down a cruiser came up who didn’t have a handcuff key to open the lock so climbed back on his boat and just sate there. He  was still there when the team came up to bring the motor of the pair down. I didn’t realise what was happening but the girl from the boat that had passed me worked him up. Then the motor went down and another came up who wanted to turn up the Caldon so the boat that passed me didn’t go into the locks as he didn’t want to be in the way, then another came up. By now I was on the lock moorings but in front of another boater waiting to go down so I let him passed. The next boat coming up actually had a chap I use to work with some 20 years ago on board, so we were able to chat while the boat ahead of me went down and his missus brought their boat up. now it was our turn, well we had only waited 1¼hours.

We met boats in each pound and the two work boats were tucked away in front of the museum. 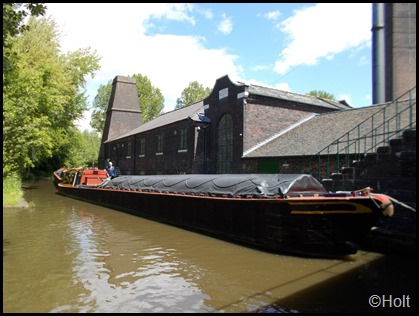 We had a good run through Stoke only turning one lock on the way and a sunny and uneventful trip to Trentham Lock where we caught up with the boat ahead. There were several boats coming up and one of the boaters introduced himself to me as a fellow blogger Steve from the boat Albert with his rather nice sounding Ruston and Hornsby engine.

We had planned to moor a short way below Trentham lock and visit the Wedgwood visitors Centre but it seams they will not be open until sometime next month, so we carried on and joined the end of the row of boats moored at Barlaston.

As its my Birthday tonight my wife is taking me to The Plume of Feathers for dinner, which I will probably pay for with the credit card. 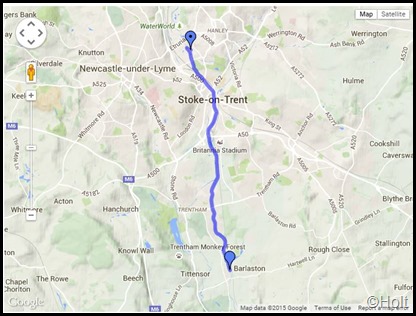