Well it started raining just before half three yesterday afternoon and has not stopped since, some times it was only drizzle and others very heavy , but mostly just a steady rain. In the 24 hours I recorder 17.5 mm.

We decided that we would stay put this morning and then after lunch head back to the marina as we were going home today or tomorrow anyway.

A little after 12 things brightened up and the rain almost stopped, after a short discussion we decided that we would go home tomorrow so tonight we would have to eat somewhere. The Plumb Pudding pub was only half an hour away, but we would have to go almost in to Rugeley to turn. the other alternative was back to the marina and out in the car to eat, so we decided to boat to the pub. bad move. We pushed off at ten to one and in less than a quarter of a hour it was raining steadily again, so we just pushed on.

At the Plum Pudding the moorings were full but we guessed they had stopped for lunch, Diana wanted some shopping so we would carry on to Rugeley, this would mean turning round at the winding hole the other side of Rugeley. The moorings in Rugeley were also full so we carried on with a view to stopping on the way back. At Taft Bridge, not far passed the winding hole there is a boat that sells diesel so I would motor to there, fill with diesel, reverse back to the winding hole and then stop in Rugeley. It was quite a bit further to Taft Bridge than I had remembered so after taking on 90 lt at 65p/lt I had to reverse ¾ mile before I could turn round.

On the way back we met some of the boats that had been moored by the pub, so hopefully there will be a space when we arrive. Crossing the Trent on the aqueduct it still looks as if water 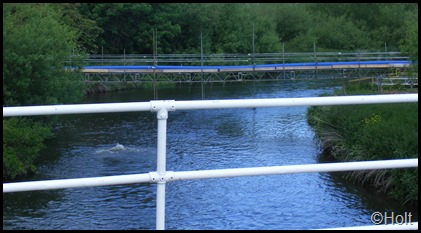 is bubbling up mid stream and there is a large water filled hole in the field by the aqueduct wall.  The photo was taken last time we passed as it was chucking it down today, but the temporary pipe bridge has needed reinforcing where it has sagged in the middle.

Arriving in Rugeley there was now space to moor and Diana could nip to Tesco for her shopping, by now it was raining even harder. Why didn’t we go with plan A?

Once the shopping was complete we were on the move again, as we travelled south the weather improved. Again we had a clear run through what use to be Armitage tunnel and once out the end we could see all the Plum Pudding moorings were now vacant. We are moored directly outside the rear entrance to the 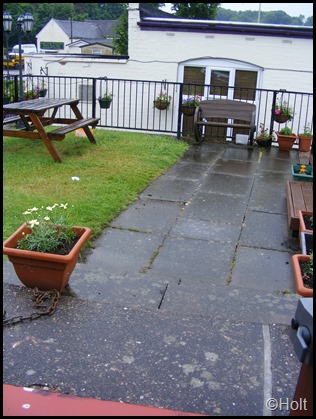 pub, you cant get any closer. This is the view from the from our front deck. Just as we finished mooring at 5-30 pm it stopped raining, but only for about 10 minutes.