The weather this morning was not quite so good as yesterday and this was the sunset we had last night. 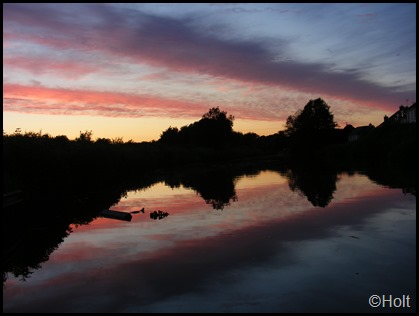 It was only a short run to Western lock which we expected to be with us as we had just had a boat come by, but we found it empty. It was not long before we could see the boat ahead so we eased off so as not to catch him, our target for mooring was Gt. Haywood which was not that far away. At Hoo Mill lock there was a boat coming up and one waiting below. As we went down the lady from the boat below thought see recognised us and it turned out we both moor in King’s Bromley Marina, even more coincidently when we left the lock I recognised her boat and husband as being the one we followed out of the Caldon Canal earlier this week when we had to wait over an hour. We found a mooring OK 3 boats below Gt Haywood junction, it was the only one. Our reason for stopping here was my son and grandsons were coming for lunch (we thought)
The activity around the junction was quite interesting with boats trying to turn in and out as well as go passed. One boat came passed and the went passed again backwards before coming passed a third time forwards, he was looking for a mooring.

Quarter to two and I get a text “we will see you for tea” With that we decided to head off to Wolseley Bridge and meet him there. We were to meet 3 more boats from our marina in the course of the afternoons travels.

There was an event taking place at Gt Haywood consisting of running and canoeing. When we dropped through Haywood lock there were canoes everywhere, no warning notice on the lock, no 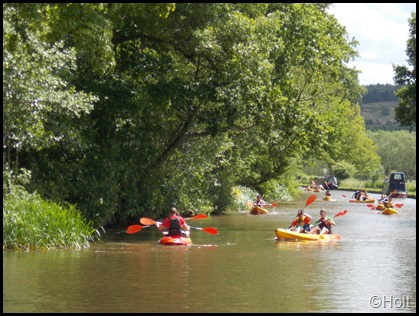 Marshalls. they were using the lock moorings as a point to launch and get  out and as it was a point to point thing they had a point on the offside just below the lock as well. There was a boat waiting to come into the lock and as he went towards the lock a canoe came up beside him and straight round his bows, I bet he didn’t even know about it.
The points they were finding were marked white fenders, tying one just through a bridge hole and one to the lock landing was 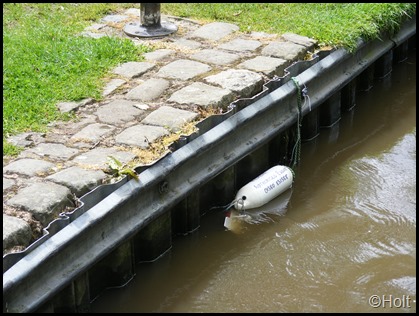 not the brightest idea to my mind and the one blind below the lock gates was just madness.

We arrived at Colwich lock just as a boat was leaving and there were three more below waiting to come up, we were certainly going the right way today.

At Wolseley Bridge there were only three boats moored before the bridge which left a nice gap for us to drop into and await the arrival of the boys.

We all went to the Wolseley Arms for diner at 6 pm and the places was packed, they fitted us in on 3 round tables up the corner of the bar sitting on the sofa, it was that or nothing. Although they were very busy the service was good and the food well cooked and fresh all coming out in a timely manor. It took a few minutes for the waitress to get the idea of the boys having main courses at the same time as dads starter but when the boys the asked for a starter after their main courses because they were still hungry she didn’t bat an eyelid and they arrived before we had finished our main courses. 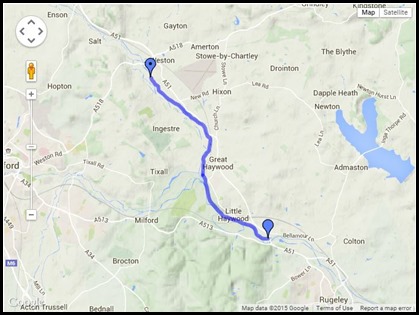