Last night we walked to Rilys Indian Restaurant for a meal with friends who we haven’t see in some time, it is just across the road from the moorings and its an establishment that I would happily recommend.
I was a bit bothered mooring in a town, near both a road and a piece of park land with seats, but we had a very peaceful night with no problem. The nosiest thing was the road sweeper about  7 am this morning.

Today was dry but a good deal cooler, setting off at 10 am I let the bows swing round with the current before heading off downstream once more. It seems that Evesham has a now road bridge that wasn’t here last time we visited, so that’s a gain but 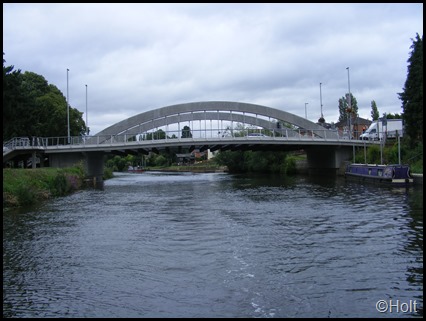 they have lost the free pump out facilities down by the railway bridge, really handy for giving the tank a good clean out. The first lock we came to was against us, not surprising considering the number of boats that had left Evesham ahead of us.

As we made our way downstream with both jumpers and coats on there was very little of interest to post on, We did pass this Cormorant who was displaying his skill at standing on one leg on top of a rotten tree trunk for us. 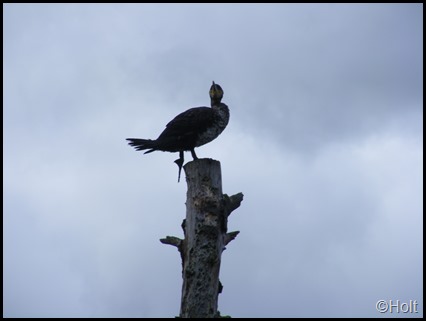 We stopped for lunch at the moorings by Wyre Lock, the moorings are just down the weir stream and moored opposite was this boat with their own floating BBQ area complete with Astra Turf.

Several boats went both down at up the lock while we were there and when we were ready to leave there was a cruiser just turning the lock to go down, so I asked if he was happy to share which he was. I suggested that I went in first, this is not the easiest of locks for a Narrowboat as it is diamond shaped and only the bow and stern touch the walls, which makes it a bit difficult to a hold it with a cruiser beside you and also to climb back aboard when its time to leave as the steps ate half way down the lock in the angle of the diamond. I let him go out first before I loosed any ropes and reboarded, but we still caught up with him at the next lock while he waited for two boats to come up. There were free moorings in Pershore had we wanted to moor there, but I wanted to get a bit closer to Tewkesbury for the night.
Above Tewkesbury lock there were a couple of groups of canoeists, the first were in Canadian  Canoes on the main river

by the end of the town moorings, but the second lot where in the weir stream so I suspect they had been shooting their way down to below the lock. 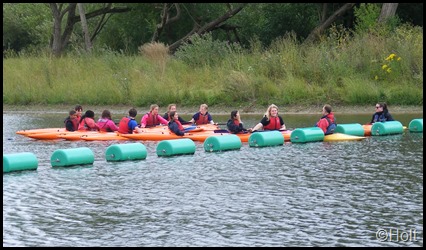 One of the views that is always with you on this stretch of the river is Parsons Folly on the top of Brandon Hills. As you make 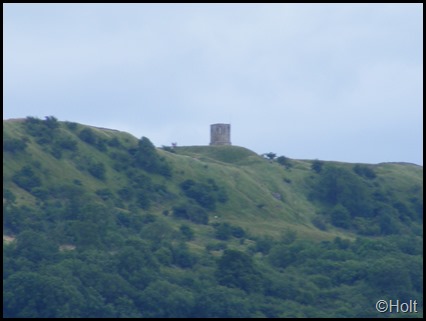 your way down stream this tower appears at every angle from the boat, from dead ahead to dead a stern both by the port side and the starboard. It is actually due south of Comberton Quay.

At Nafford Lock there is a swing bridge across the lock and this has to be left in the closed position when the lock is not in use but opened to use the lock. One side of the lock is the weir and the other side the sluice, the sluice is on the line of the river so

you have to do a dogleg into the weir stream you enter the lock, here we met a family on a hire boat doing their first river trip and they were very apprehensive of the whole thing, maybe that’s good. We only did about another half mile mile before mooring for the night on the outside of a very tight bend known as “Swan Neck” or Birlingham Wharf. You can see why its called “Swan Neck” from this piece from “Waterway Routes” map. 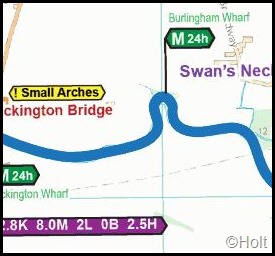 Once moored Diana went for a walk and took this photograph of Harnser moored on the bend, which I might add is very wide and an official mooring place, from the other side of the river. 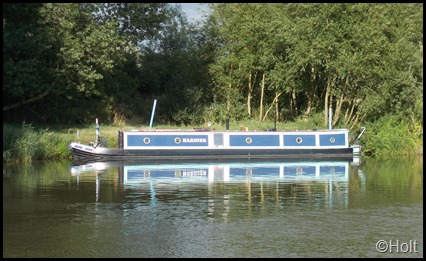 For a change its Harnser’s better side. 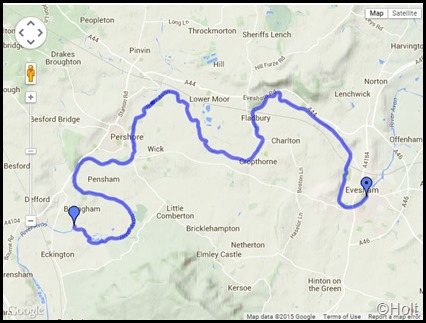