Not much to say really as the boat has not moved, it was a bit chilly last night with a clear sky and full moon, the lowest temperate I recorded was 4.3° C at 5-30 am this morning.

Although the boat didn’t move we did and at 9-30 am we were at the Slimbridge Wildfowl reserve as the doors opened, its only a short walk down the road from where we are moored. 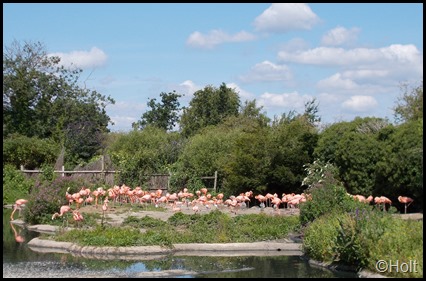 Yesterday we passed nb. Pilgrim moored at Sainsbury’s so I gave them a ring to see if we could meet up sometime for a meal, as they were only a couple of hours behind us they said they would join us today and we could sort something out.

After spending the morning at the Wildfowl Reserve we walked back to the boat just as Barbara and Malcolm were mooring up behind us and we have agreed to go to The Tudor Arms for a meal tonight.

It really feels like summer is here at last with bright sun and clear sky’s but there is still a cool breeze from time to time.

When we got back the Lady Elgar was moored opposite and proceeded to pump some very foul looking water into the canal which I suspect was the contents of their toilet holding tank. I was hoping that they wouldn’t be staying overnight with their generators running, but by 4 pm their guests had also returned from the Wildfowl Reserve and they were on their way towards  Sharpness.