I didn’t intend to blog today, what could I say that was new on such familiar territory, well here goes.

A steady drive to the boat until the M42 junction on the M6  where it was all stop for road works and then a good run the rest of the way stopping at McDonalds for lunch, we were going to go to the Harvester at Basset Pole but they were queuing for seats let alone food, so it was McDonalds just across the road for a snack and then on to the moorings. We decided not to leave until 4pm  to let Fradley Junction cool down. Not long after leaving the marina a small boat was up behind us, his wife had arranged to meet the kids and grand kids at Fradley Swan at 5 pm so I waved him by. We still caught up with him at Woodend lock as there was a boat ahead of him. At Fradley junction we turned right towards Fazeley with the intention of taking water, however when we arrived the boat ahead of the small one who we had followed down the locks was taking water and at the second water point a boat was moored so I pulled along side him. Said to the lady was she happy for me to run the hose across her roof explaining they were on the water point. To be fair someone had removed the waterpoint sign. To give the boater their due she popped out and helped me tie alongside and also ran the hose over for us. Then the best bit, her partner arrived and it turned out he used to be a professional boater driving a tug for Sea and Land and he was most apologetic. As he moors in the same marina as us I promised I would tell every one. When we had finished filling with water he felt so guilty that he actually moved to the 24 hour moorings just through the swing bridge.

Once we set off needless to say all the moorings were taken so we thought we would move on to Fradley village by bridge 90, there was only one space at the end and the next boat along was running a generator so we pushed on finally mooring at 7pm by Fradley Pumping Station. 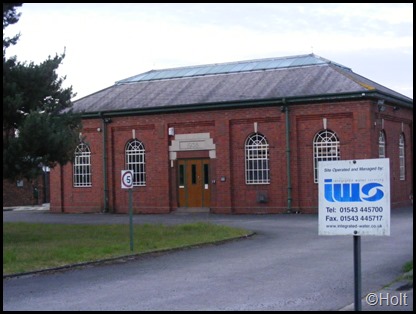 There are notices saying loading only and CRT work boats, but if

one turns up now we will move on,  if not we are here for the night, its about as far away from the A38 that the canal goes until you reach Huddlesford and I didn’t want to go that far tonight. 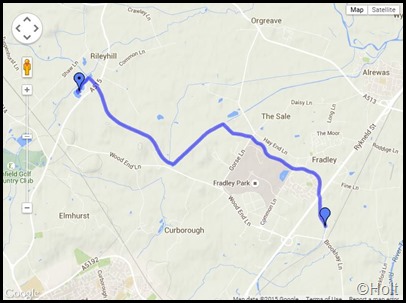