We set off at about 10 am with the weather showing every sign of getting better. We had to carry on along the Old West a short way before it was wide enough for us to wind.

We had just passed the Little Thetford moorings when I spotted a cow in the river. 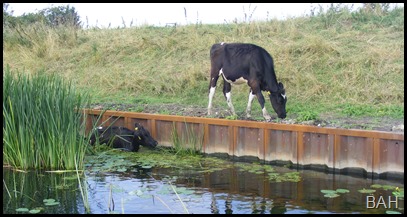 I pulled in at an angle so any passing boats had to give it a wide berth and dialled 99 to call Fire Brigade. I was most impressed with the response I received. The operator put me straight through to the Fire Brigade control to who I explained where we were and what we were doing, she accepted all the information I could give without question and within 5 minutes we could see the fire engine complete with flashing lights waiting to cross the railway.
4 Fire Fighters walked along the flood bank, 2 of them donning their life jackets. One of the men told me that they would walk it along where they knew the water was shallow and the bank lower, he then told me this was the third cow in 5 days at this spot. Sure enough a couple of them calmly walked it along a few hundred yards and it was able to climb out by its self.

Seeing all was OK we continued in to Ely and moored close to where the trip boat runs from so that we could show Chris and Gwen, our guests for the weekend around Ely. By now it was really warming up and as we made our way back down to the boat we called in at the Royal Standard for lunch, a good choice as they had Trawler Boys on the bar, a Lowestoft brew.http://www.green-jack.com

Returning to the boat we couldn’t pass the Ice cream van without getting a 99which we consumed in the sunshine on Harnser’s front deck.

A little after 3 pm we set off back to our home moorings so that Chris and Gwen could head back home. I think I can say they both a relaxing couple of days and the weather couldn’t have been better for them. 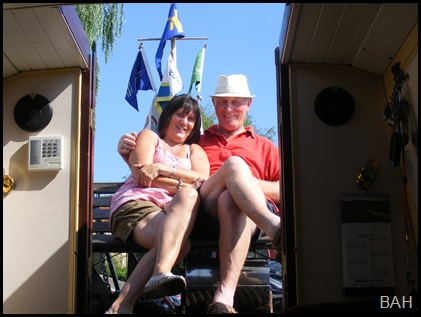 We have also called out fire brigade for calf in the river nene a few years ago.Arrived with inflatable boat. On another occasion woken up in early hours by a banging noise on hull discovered a Munjac deer between the boat and river bank managed to get it to shallows where it jumped out water and ran off.

We just missed you in Ely, we bought Willow through at about 12:00 and moored until 2:00, but you must have been in the Standard when we passed Harnser on our way to get ice cream!