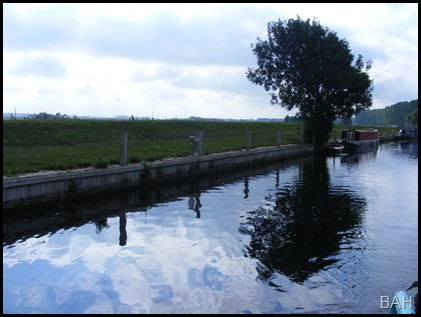 morning and travelled quarter of a mile upstream to fill with diesel and sort out our final leaving arrangements.  Then it was down stream and off to Denver. Avalon had come down the river yesterday afternoon and were still outside the Ship when we left.

I rang the lock keeper at Denver to check what time he would be locking, 12-10 was the reply and as we needed a pump out I needed to get a move on. 3 swans came to say good by to us, I shall miss this old river.

We arrived at Denver in good time, but I could see a cruiser already in the lock waiting out, but he was heading for Kings Lynn and would leave as soon as the tide made. There were several Narrowboats on the lock mooring and others on the EA moorings looking expectantly to the lock. As I started the pump out Diana walked round to the lock to book us in with the keeper. We were 5th out of 6 boats to leave, the sixth was a bit longer and needed to wait for Salter’s Lode to make the level before he could get through.

We had completed the pump out and were just by the EA moorings as the first Narrowboat started to enter the lock, others were dodging about. I pulled in and moored as it would be 2 hours before it was our turn. Not only were there boats coming from Salter’s but also some cruisers from Kings Lynn.

When we finally locked out I made my way down to Salter’s lode Lock meeting a Fox’s boat on the way.

It was very hard to tell what the water was doing, it had been running out for two hours at least but still it didn’t seem to be moving. I set up my turn into Salter’s lock and almost came round too tight having to widen my arc running straight in mid channel touching absolutely nothing. Apart from the lock keeper and one other there was no one there to see it.

Back on the Middle Level and nothing had changed, Paul the lock keeper told Maureen at Marmont Priory lock we were on our way. The weed along Well Creek was much better than I had hoped for. We passed one of the boats that left before us moored at Outwell and a second in Upwell. At Upwell I rang Maureen to let her know we were still on our way, this was shortly before I met another Fox hire boat coming towards us. As we approached Marmont Priory Lock the gates were open, not ready for us, but to let another Narrowboat out. As soon as they were clear we went in and Diana hoped off to lend a hand, after a brief chat with Maureen, her husband, her daughter and her grandchildren we were on our way again. Below the lock the water is much deeper and wider making the passage of the boat much easier. By the wind turbines they were busy harvesting and looking back it looked like a bank of cloud for miles along the horizon, it was actually dust. Just then a tractor and trailer sped along the bank passed us. The dust cloud he put up completely obscured the river for a bit. 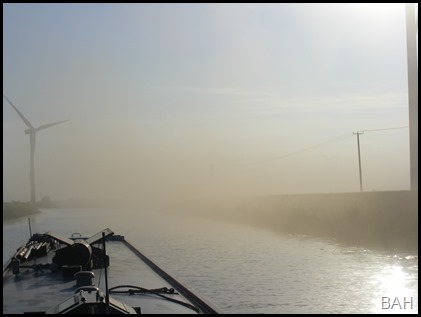 We came into March a few minutes before seven and it was wall to wall boats, I pulled against the off side, not an official mooring but there was already one boat on this side. 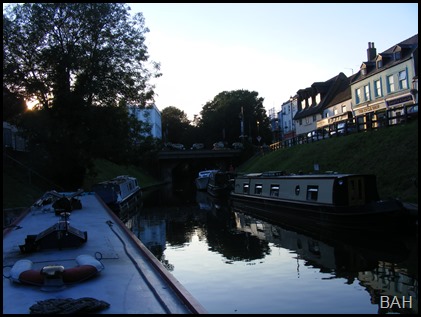 Before mooring properly Diana walked along the river to the park and telephoned back that there was a space there long enough for us so I pushed off and headed down to her. There was only one cruiser on the end of the moorings and more than enough space for us to tuck in behind them. As it had now turned seven it was decided that a Fish and Chip take away supper would be in order.

Oy, where's my linky on Avalon?

We were sound asleep. But about midnight last night a big plastic with what sounded a massive engine went past. NO lights what so ever! well except the ones I could see on the instruments. See what you miss going to bed early.