The day started fine and the wind had moderated somewhat but it was a good coat colder than it has been. We set off just after 10 am and met a steady stream of boats which resulted in the first two locks being in our favour.

Just below bridge 11 a water main crosses the canal at high level.

It looks as  if a new water main is being laid, but this time tunnelled under the canal between a concrete lined excavation

each side. They are doing something similar at Fradley, this must be a lot more expensive than trenching across the canal bed, but of course does not require a navigation stoppage.

Just below Swanley Bridge Marina moored against the tow path were Mountbatten and Jellicoe looking splendid. These boats worked out of Braunston for many years but now sell coal and diesel on the Llangollen canal as high as Trevor. If you need diesel you will find them much cheaper than any of the marinas in the area. 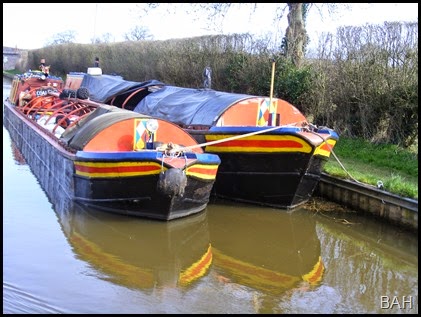 We had just gone through the next bridge when boating friends of our came round the next bend and as luck would have it we were right beside the 48 hour moorings, so we both pulled over and went on their boat for coffee and biscuits as you do.  After a short while of putting the boating world to right we were off again heading towards the junction.

The work is still going on at bridge 5 but we saw no sigh of life, they have fitted these boards to the inside of the arc which I assume are to support the brick arch. 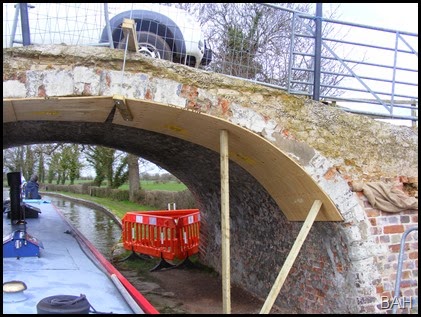 I don’t know how much disruption to boat traffic its causing. The finished result on the down stream side looks very good.

As rain was forecast for the afternoon we decided not to stop for water above the locks but get it tomorrow.  As we approached the top of the Hurleston Flight a boat was just entering the top lock from below, so this put the first two locks with us, by the time we had done the second lock a boat was coming in the bottom of the flight so we waited until they came up two before going down ourselves, so no locks turned.

Leaving the Llangollen we turned hard right onto the Shropshire Union canal, a short way from the junction we passed these youngsters out enjoying themselves.

The weather was holding better than expected and we were almost to Hack Green locks when the rain started, Although we kept meeting boats and there was one coming down Hack Green as we approached we now had a boat ahead of us who we had to wait for to lock up ahead of us, they were following a second boat so they had to turn the second lock as well. Once we were through the locks we decided to moor on the visitor moorings at Hack Green for the night. Since we have been here there have been a few boats go by including the working boats Aldgate  and Stanton. 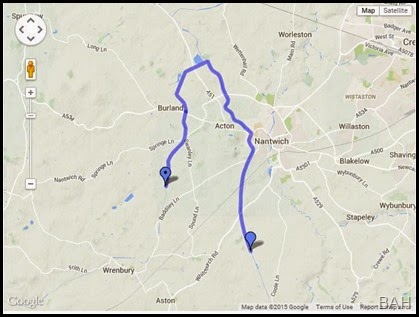