Set off a few minutes passed 10 to give the boat ahead a good start in bright sunshine, however the wind was a bit chilly. As we approached Platt’s Bridge it looked like new, once we had passed under it we could see why, the photo is the up stream side.

Just passed the bridge is Swanley Marina, it wasn’t here last time we came this way. There were lots of cars around so maybe several boaters are planning to go out for the weekend. 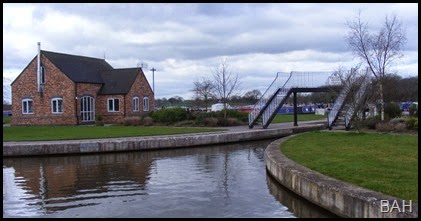 Although we gave the boat moored in front a good start we were still in a queue at the first lock, but it was a boat just out for the weekend who had just left Swanley Marina so that answered my earlier question, at least one we out for the weekend. We did meet a few boats today, 7 in all and a couple in the right places. This is a lot considering in the past two weeks we have only seen one on most days.
One of the boats we met was waiting to go into the Baddiley No 2 lock, as he left and passed us the steerer called out “I’ve just read your blog” I didn’t get his name but this is the back of him. 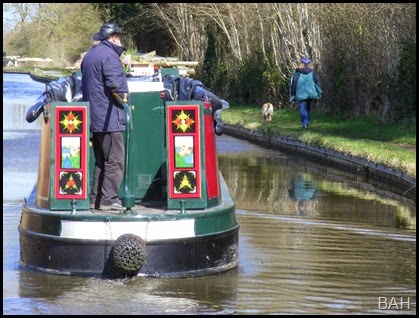 While working through Baddiley lock we noticed this track worn into the grass, from the way its worn it looks as if something goes round the end of the stop plank hut with some speed and quite often. The soil has tiny little holes in it like toe nails, it is obviously a regular occurrence from how well its worn and goes all the length of the bywash. 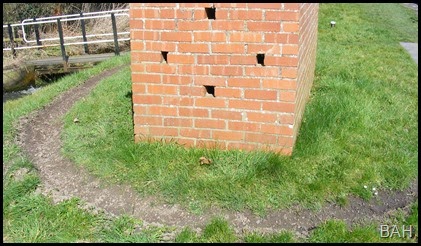 When we got to Wrenbury Church lift bridge the boat we were following had it open, this was another spot where we met a boat and they also came through while the lady ahead had it open. I offered to drop Diana off and pick the other boats crew up but they insisted we carried on. 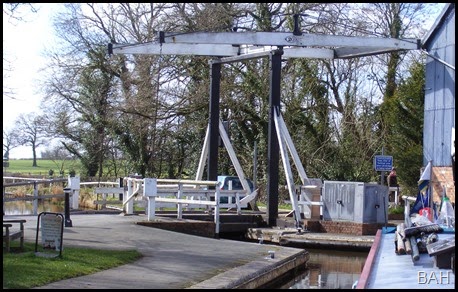 We were able to repay the favour at Wrenbury Lift Bridge, where Diana manage to hold up about 6 cars, one hooting because the boat behind was coming through quite slowly. As soon as Diana had the barrier open they were streaming over, no regard for the red flashing lights.
Just before the bridge is Alvechurch Boats and of course they still have most of their fleet in, I don’t know if this officially a winding 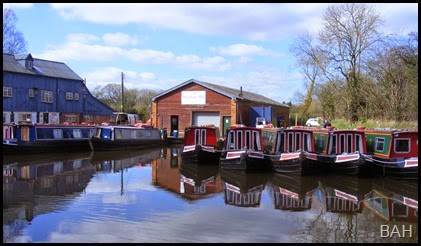 hole, the guide books show it as one and if you did want to turn there before the bridge there is still room but looks a bit intimidating.

The boat that we shared bridges with winded at Thomason’s Winding hole ready to return to the marina tomorrow. This winding hole wasn’t there last time we came this way and is not in our guide books, but its about a mile west of Wrenbury Lift bridge.

The sheep had obviously eaten all the greenery from the top of these roots and were about to eat the roots themselves, I think that this shows if given the choice the sheep like the green bits best. 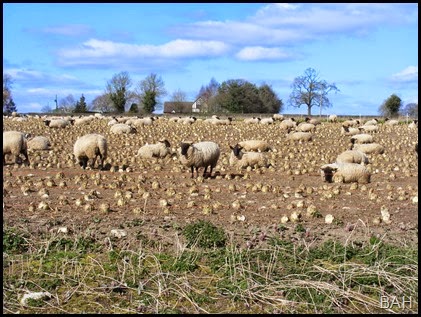 At Willymoor lock the bywash seemed to be flowing faster than the others, I know it must had the same amount of water but it enters the canal with more force. Beside the lock is the pub, The Willymoor Lock Tavern and the only access to it other than water is the footbridge across the tail of the lock and the bywash.

Just one more lock, Poveys Lock and we were calling it a day. Here we met two boat and as the lock, like most of the others was against us we waited while the first boat came down. On this canal it pays at some locks not to wait at the lock moorings, if you do there is a good chance the boat exiting the lock will hit you as the bywash sweeps them across. this is one such lock and he didn’t hit me because I was below the moorings, as you can see from the photo above Willymoor is another.
We finally stopped for the night on the 48 hr moorings below the Grindley Brook flight, we are saving these for tomorrow. 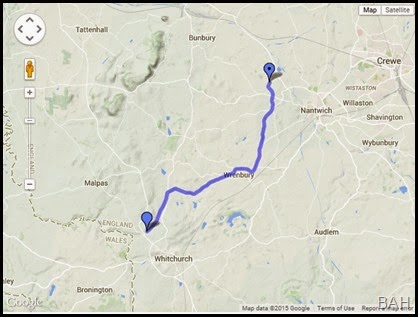 NOTE
Blogs may get a bit sporadic over the next  few days as the Llangollen Canal is not the best place for an internet signal, so you may miss a day or two and then get a bunch together.