Yesterday I posted a picture of a pair of geese and asked if they were likely to breed, I was told its quite common pointing me to this web site where you will find this photograph. 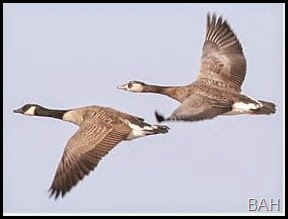 Again a hard frost last night with everywhere white first thing this morning, we set off at our normal 10 am and caught up with a hire boat at New Martin bottom lock, we thought they would have been further as we had already met a boat so assumed the locks would be with them, but there must have been someone a short way ahead as both bottom and top were against them. The electricity company were busy installing new poles and overhead high voltage cables. 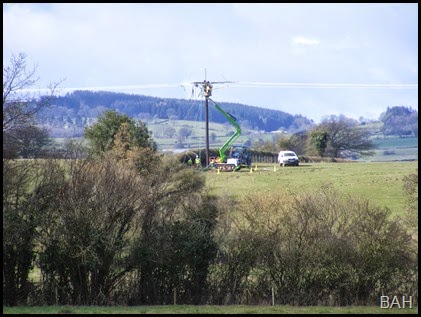 The weather was very changeable a bit of rain some sun shine and even a hail shower, so at times it was quite cool and others warm. There are a lot more boats about today, mostly hire boats but we have met a couple of private ones. We were again clocked by a CRT operative checking movements and licences.

With the changeable weather this group of trees were nicely light against the distant darker clouds on the hill side. 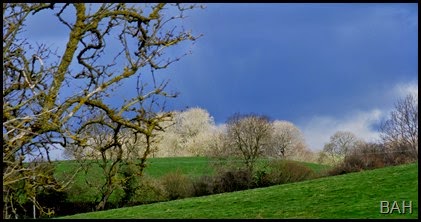 We rounded the bend under bridge 17W to find our path blocked,

but almost immediately the tug driver waved us through and with the digger pulling him over we were directed to go round the off side, ¾ of us managed it before we were hard aground so the digger driver just slid the tug and flat forward so we could slide off sideways (with the aid of a shaft) into deeper water. 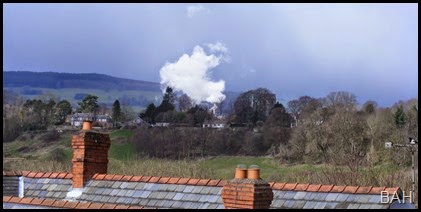 venting into the sky, I then remembered there was a wood pulp works near Chirk which we would pass close by later.
Just as we approached Chirk Aqueduct it started to rain, 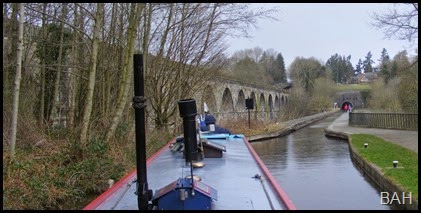 I understand there are plans to put railings along the offside to stop people falling off, I am not sure how many have actually fallen off in the last 200 years but some people are just dafter these days. We had just started crossing when a boat emerged from the tunnel at the far side, so that was good timing and about ¾ of the way across a second boat came out of the tunnel and waited behind him, which was also handy, as when we reached the far side the tunnel was clear and we could go straight through. Passage across the aqueduct and through the tunnel in this direction is quite slow as you are pushing against the current in a very narrow channel. By the time we cleared the tunnel there was a boat waiting to come through, unfortunately for him, just as we came out another came in at the other end.

It wasn’t long before we were on the Pontcysyllte Aqueduct with its straight drop on the off side. We had planned to moor in Trevor Basin for the night, but the hire company had other ideas and had completely filled the entrance to the basin with their hire 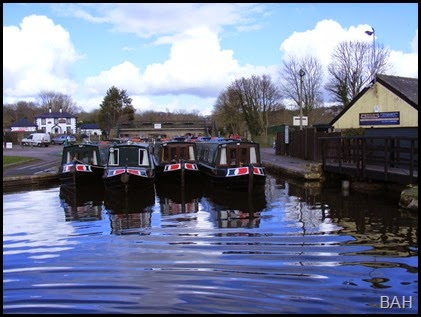 boats, the visitor moorings are at the far end behind this blockade. It looks like a gap on the right but there is a boat on that side in the second row. This meant we had to turn very sharp left and up the feeder towards Llangollen, something we planed to do tomorrow. mooring on this are is difficult except at designated moorings as the canal is in a concrete channel. The first moorings are opposite The Sun at Trevor so that is where we have stopped. The only downside is that the A539 runs between the canal and the pub so its a bit noisy.

On a lot of busy visitor moorings you get gaps between the boats because for some reason a lot of people don’t like tying to a ring that is already in use, the result is you only get 5 boats where there is room for 6, an important issue on a busy canal like this in areas with limited moorings. Whoever installed these moorings thought about that problem and put two rings on each anchor point, so you don’t need to share rings. 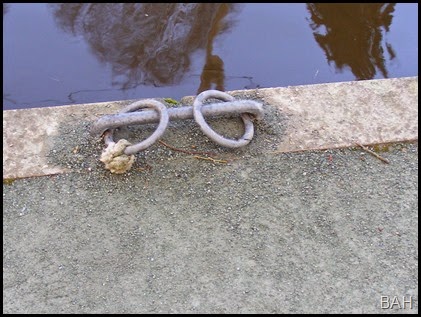 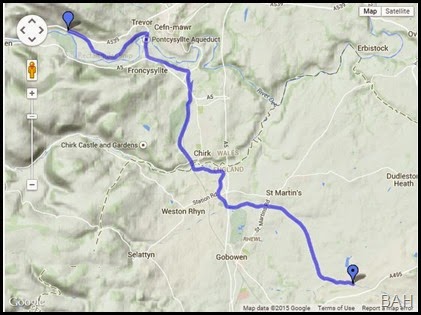