No internet on 3 yesterday

We set off at about 9-30am with a bit of cloud in the sky, but that didn’t last long and it was soon bright sun and blue sky’s, Travel was not that fast as we were passing lots of moored boats. The Linseed is coming out in bloom putting a blue haze across the fields. 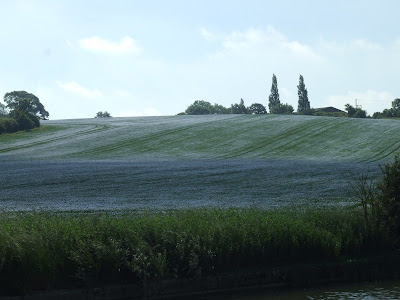 We hadn’t been going long when a boater coming the other way called out he reads my blog and was also a fellow CIBC member, it was Brian on Elysium. Always good to put a face to a name but at my stage of life I tend not to remember them.

I have not been happy with the way the engine has been running for the past couple of days so I removed the air filter, an instant improvement with a reduction of vibration and the engines not sounding so laboured. These are cleanable filters but require an airline to do it, so I will run without one until we go home. The boat we had been following since we set off turned right at Napton Junction and we followed them to the top of Calcutt locks. Unfortunately for us they moor in Calcutt marina so we only had their company for the three locks but I did see another boat following us now so maybe not all was lost.
We saw our first young Grebes of the year just inside Ventner Farm Marina. Willow Wren seems to be expanding into caravans and glamping, 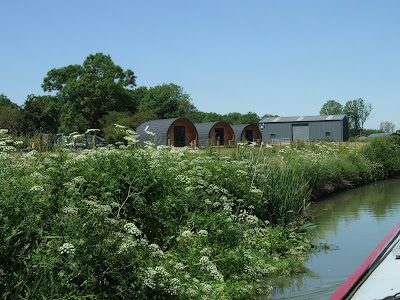 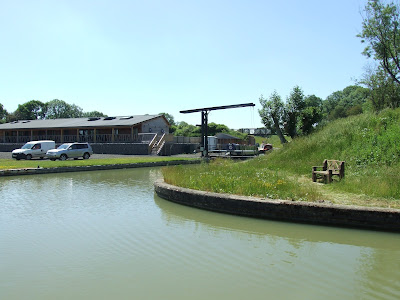 We travelled at quite a sedate pace hoping the boat behind would catch up, but this turned out to be a big mistake as not only did we never see them again but a boat ahead had dropped down the first two locks when we arrived at the Stockton flight. Diana walked down and he agreed to wait for us in the third lock, there was also a single boat coming up so we waited below the first for him to arrive and then went down to join the single hander. I must say from here it went very well. He entered the lock ahead fast through a single gate which blew open the offside gate wide enough for me to follow him in on the angle and slide in beside him. We would then both close up and draw the bottom paddles while Diana walked down to set the next lock with one gate. When the lock was empty he opened the near side gate and left, I followed and Diana had walked back to close the gate. We never discussed what we were doing it just worked.  One of the locks has quite a good leak through the top gates, this is not via paddles but holes in the gate. 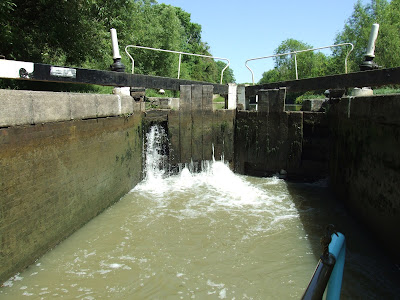 Down at the Blue Lias I pulled onto the very far end of the moorings, as there were already a couple of boats there. A C&RT workboat on the towpath side asked me to go as far back as possible as then needed to come over to strim the culvert. At the same time two boat came up the flight looking for moorings so we offered one the opportunity to breast up to us and the other moored outside the pub front door by the creaking pub sign. Needless to say we had all just got settled then C&RT buggered off as did the boat in front of us, so it was all change. We went forward to the end of the moorings, the boat on the outside came against the bank and the boat by the creaky sign came back and dropped in ahead of their friends. We in turn had our first pint for 12 months and as its Diana’s birthday booked a table in the Blue Lias for dinner tonight from their very limited Covid driven menu.