Yesterday afternoon and early evening there were a continuous stream of boats coming down the flight, no one going up. I did suggest to Diana we set off at 3-30am as it got light but it fell on deaf ears. Anyway about 8-30 this morning I am just putting the tiller on and a boat chugs out of the lock behind us, so a ride to the top with empty locks was scuppered.
We pushed off at 9am. the temperature was already 20°C, luckily the boat going up had moored above lock 6 so things weren't too bad after all.  By the time we reached lock 3 the Volockies were at work, a lady assisted at 2 by opening and closing the bottom gates before heading down to 3 in the shade.
As I sat in lock two I could see the 2 Volockies at lock one, as we came up the bottom paddles ahead were drawn, then lowered again for a boat arriving from above before finally opening again. By the time we had worked the top lock the Volockie was peeling layers off. Just beyond the top of the locks there use to be a boatyard, this has now been taken over as some sort of community project, but if anyone is interested they are offering winter moorings. More details at https://rubysyard.org/.

The willows are now shedding their seeds which cover the water like scum, as you pass the trees its like boating through a snowstorm with all the white seed heads floating in the breeze. 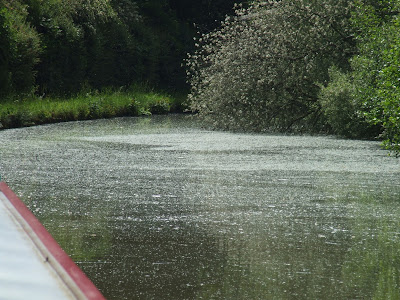 I have seen one or two boats with Jebuses but as a rule they are shaped to fit the bows of the craft they are attached to, this is the smallest I have come across. 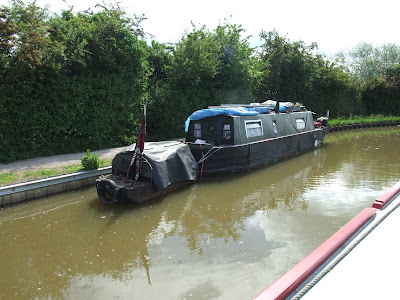 A little further on where Rothen use to keep there boats before they had the yard and still do have a couple of boats there, the Sand Martins have made good use of the holes in the wall to make nests, we counted three with chicks looking out. There is nothing to stop them falling into the canal. 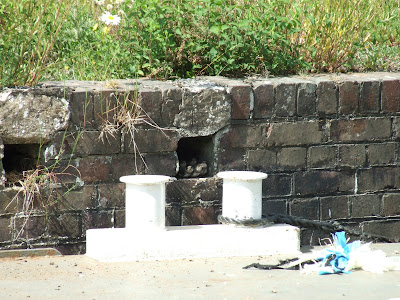 As we passed The Anchor Inn someone has dumped all their refuse by the dog poo bin. I have already informed CRT, but why do people do it? 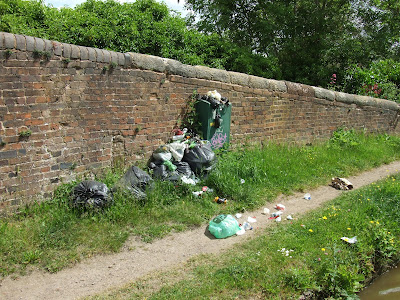 I have never seen so many boats moored towpath side in Nuneaton,  there was a row opposite the boat yard as well as some before and some after, is this an alternative spelling for Nuneaton? 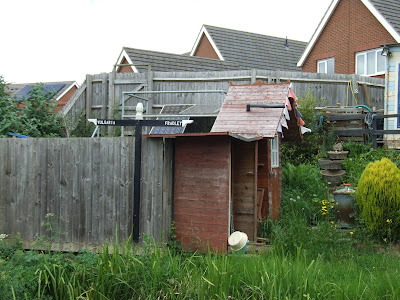 Just as you are almost through Nuneaton you pass this house on the off side who, shall we say and an alternative view of landscape gardening. 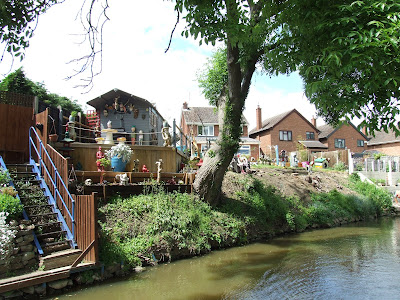 We stopped for a few minutes to chat with Peter, we met him and Hazel  on the Trent before we had our own boat and kept in touch ever since Hazel passed away about 3 years back and peter had a stroke, but he is making good progress on the road to recovery.
Our target for tonight was Marston Junction and we are moored on the Coventry a short way before it but close enough to watch some of the antics as boaters leave the Ashby canal 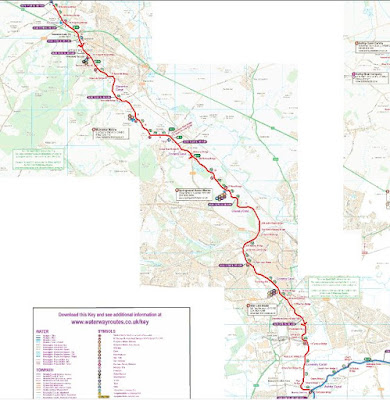