As it was raining when we were due to set off this morning we staid put and had a quick game of Ludo finally getting away at 1045. it was rather slow to Marston Junction due to a very slow day boat which the boat behind had been following for an hour, even though we were only doing 2½ mph. we caught up to them before the junction.
The piling opposite the junction is still not finished and it looks as if they are going to pour concrete in behind the piling as there is some shuttering and reinforcing iron behind it. 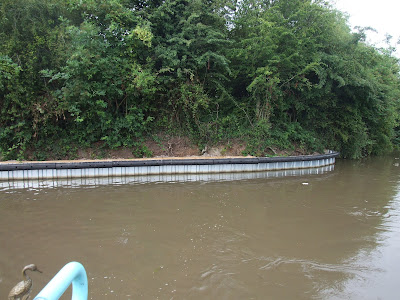 As I turned onto the Ashby I could see a boat a short way ahead doing an impression of the "Ever Given" so I stopped in the narrows to lend a hand. It turned out the chap had the center rope fast round his prop. Once we had it alongside he asked if I could help as he was suffering from cancer and no way could he get to the weed hatch. When I looked I was surprised I could, it was under the counter which meant sliding down the starboard swim past the engine, the weed hatch its self was about 200mm by 400mm in a recess of the fuel tank and the prop was quite a bit behind that. Luckily he had a selection of Stanley knives with new blades. I unwrapped what I could but the final 2 turns round the propshaft had welded together and I had to cut them between the end of the bearing and the front of the prop, about 6-8mm. Thankfully I was able to sort him out so I hope is OK now. Diana came along side and picked me up and we waved goodbye.
Coming into Hinckley these flats have Upvc cladding on the front section, originally it was black or dark wood coloured but over the last couple of years the coloured lamination has peeled of almost 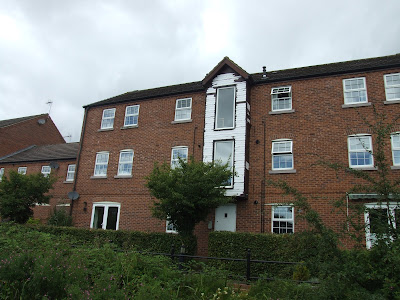 completely and its now mainly white. The building next door has the area scaffolded up but I have no idea if its to replace/paint the cladding.

After this mornings rain things have been much nicer but the wind has picked up from time to time, we have not seen many boats this afternoon, unlike this morning where we met 6 in the first mile. 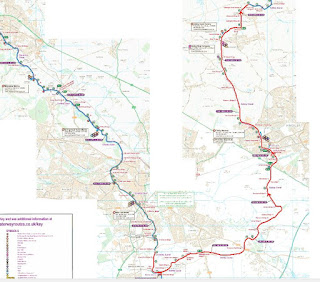