Made a start about five to nine just after another Narrowboat went by, we were able to catch them at the lock and go down together. The replacement at Whitchurch bridge is a long way behind schedule as they couldn’t get on site for 3 months due to the water levels and a chalked notice says that the river will be closed for a few days next month. 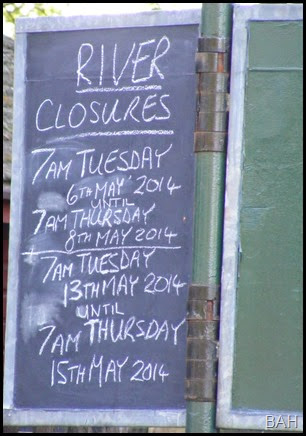 The old bridge deck has been removed but the support columns are still there. The have erected a temporary bridge just upstream from where the old one was. There was no work going on today, but it is Good Friday. 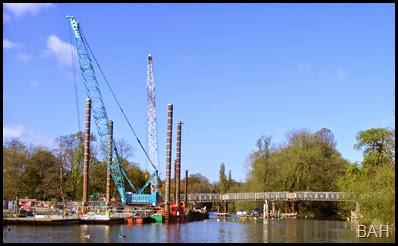 The boat we were sharing with pulled in and moored on Pangborne Meadow leaving us to travel alone again. We have seen several goslings since we have been on the Thames, but they have all been from Egyptian Geese.

We did however see one Canada Goose sitting on her nest, the youngsters will be in for a surprise when they hatch out and have to jump 15 feet into the water. I bet the owner of the boat house is not too impressed either. 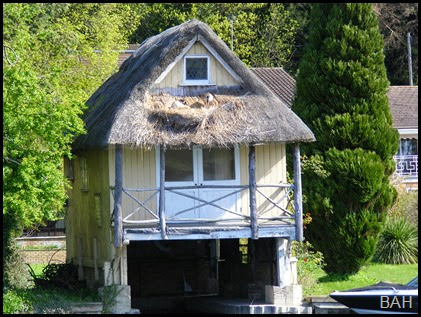 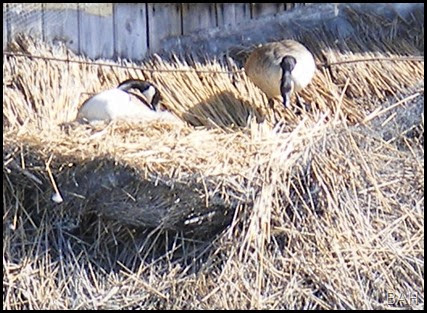 Turning into the Kennet came as bit of a surprise, the flow coming out stopped us dead, I was not expecting that much flow. We met a boater at Blake’s lock who was able to give us some information about river flows further up. We met 3 boats above the lock before we reached the traffic lights that control the one way traffic flow through Reading town centre. Diana pressed the button on the “Pedestrian Crossing” panel that they have used to trigger the light and we got a green straight away. This gives us 12 minutes to reach County Lock before someone can be given passage from that end. With the speed of flow against us it probably took us 8. It would be nice to do it slowly and relaxed so that you could look round as you passed through.

As we approached County Lock there were two boats in the lock coming down, so I hung a long way back knowing that the flow would sweep them to my side. Once they were ready to Leave Diana requested the green light for them but they still had to wait about a minute until our journey had timed out. First out was the ex working boat followed by a private modern boat. I bet it didn’t take them 8 minutes to reach the other end. 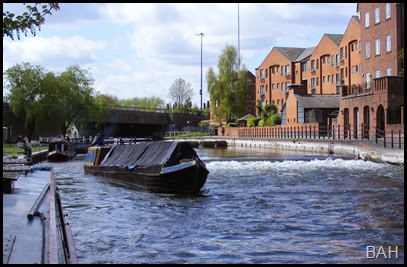 It was fairly obvious by now that this travelling over the next few days is going to be quite slow and we met another 3 boats coming down in Fobney Lock. Chatting to them they were escaping from the K&A after being at Burghfield Island boat club since September. As they left the lock they had problems picking up their crews, even though they were on our tug deck due to the amount of flow from the Water Works discharge under the lock landing. 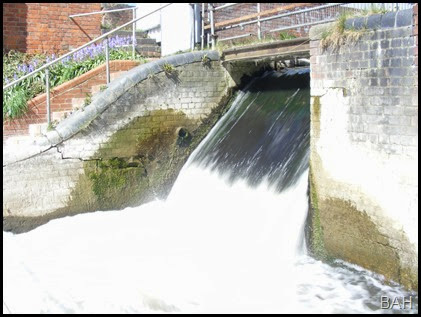 We met another 4 boats after this until we decided to moor for the night at Burghfield Mill between Burghfield Lock and the weir.
Just by where we are moored I think it is very luck that there was not a breach following this wash out of the towpath. 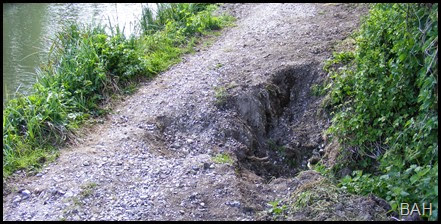 Posted by Brian and Diana on NB Harnser http://nbharnser.blogspot.com at 17:27