Yesterday evening after I had sent the blog we heard the sound of a steam whistle and sure enough there was a steam engine heading south, it was to far over for us to see what it was.

We set off at 9am, ahead of all the other moored boats to a bright day with a very chilly breeze. Just as we were about to leave the men working on the sewer replacement were about to take a small digger over the lift bridge but had to wait for an approaching boat. 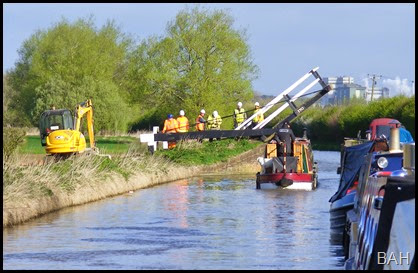 There is now a very large pump on site with a large bore ridged temporary pipe system running from it. One of the reasons for mooring so close to the lift bridge was to keep away from the pump. This job seems to be going on for ever.

We arrived at Grants Lock to find it full, but it was the only one that was with us all day. Just below the lock a party of canoeists were about to set off for a 3 day trip.

The offside trees just after Twyford Wharf have been well cut 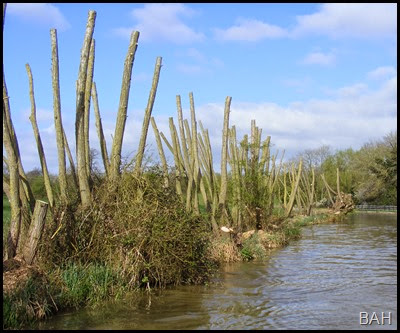 back, in fact lots of the offside vegetation has been trimmed which is a great improvement, there are still some spots that need some attention but its much better than it was. 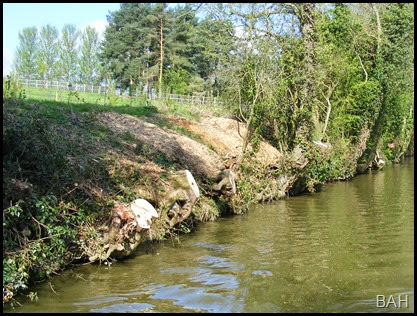 At Kings Sutton Lock we found a work boat moored to the lock moorings, I suspect this had been there at least all weekend, I find it most annoying especially when there are about 300 Mt of straight piled moorings just round the corner. Another email to CaRT I think. 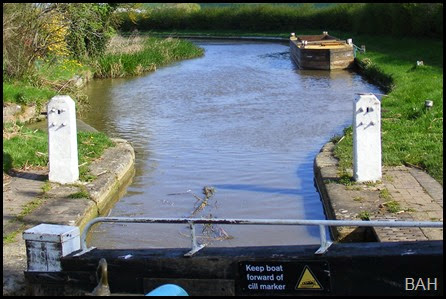 The River Cherwell at Aynho Weir Lock was behaving its self well  being well into the green, 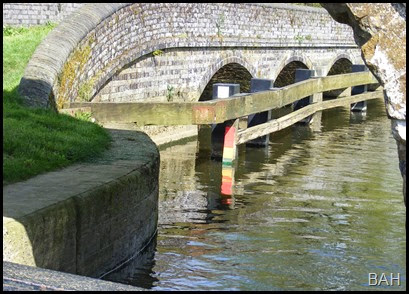 by now we had two boats just ahead of us but a steady flow coming towards us so things moved on smoothly.

When we reached Somerton deep lock there were two boats ahead and one coming up the locks who winded to go back down again. There were also three waiting to come up. CaRT replaced the bottom gate earlier this year and the pawl on the offside paddle fails to hold the rack up, someone has tied a piece of rag round it trying to hold it in but the forces are just too great, another email to CaRT. Just above the lock two conifers have blown over with their roots lifting the offside bank within inches of causing a breach. 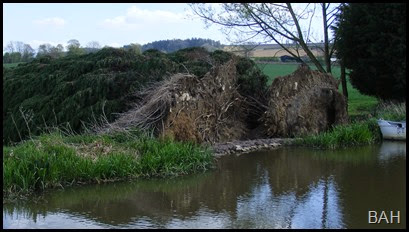 Needless to say, after helping the other boats up and down no one walked up to give Diana a hand with the bottom gate which is a bit on the heavy side, so I had to climb the lock to assist, if it hadn’t been so heavy I would have been tempted to tell her to close it behind me.

By now the breeze was easing and it was generally warming up a bit. As we need diesel and Dusty was meant to be coming this way today we have moored just before the aluminium lift bridge at Lower Heyford. I hope he doesn’t go by in the morning before we are up, we have walked down to his moorings and the boat is there all locked up.

I don’t know when you will get to read this as we have no phone of internet signal here.

Good to see you as you passed by, I had just finished servicing the engine!

The steam engine you heard would have been the return working of a Paddington to Stratford excursion with 34046 Braunton (not Braunston!)

The train was the Cathedrals Express returning to Paddington from Stratford (yes, I know Stratford doesn't have a cathedral...) due out of Banbury at 19:46 and hauled by 34046 'Braunton' which was restored at Williton just down the road from where we live.