Last night moorings at East St. were surprisingly quiet and very little movement first thing this morning. We were moored opposite an old building with some impressive brick work. Plain brick work would have worked just as well, but no the builders went to a bit of trouble to put this up. 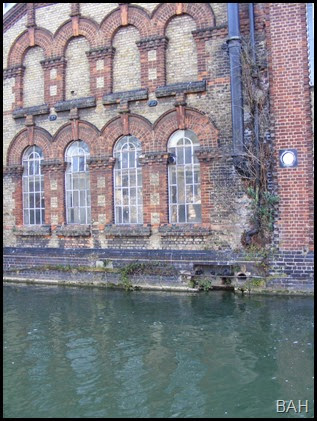 Attached to the wall is a notice from a past erea, I couldn’t imagine one like that being put up today. 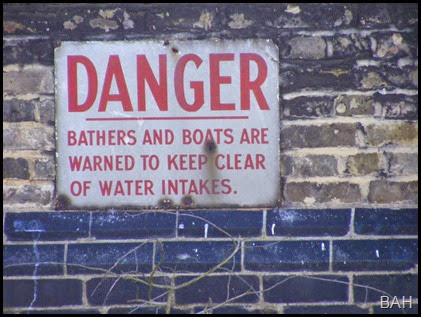 We set off at 9am when the lock keeper came on duty and had a very quiet run through the town. Our plan yesterday was to go as far as Christ Church meadow and moor opposite there. It’s a good job we didn’t as it was full when we passed.

Just before the A423 road bridge I spotted this group making their way across  the field. 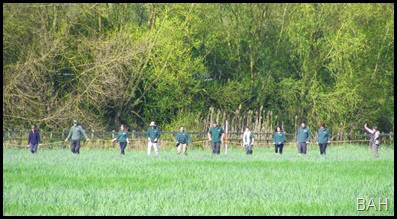 An uneventful run down to Abingdon in bright sun with a very sharp breezy making it feel cool. We met a couple of rowing boats full of kids under tuition. Above the lock this strange boat was moored, I have a feeling it has been featured in a magazine at some time. 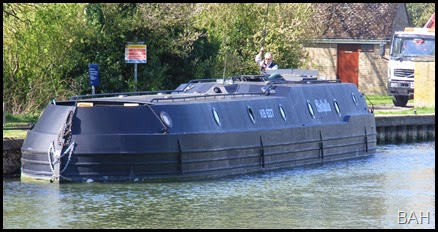 Below the lock there has been some serious silting which the EA are dredging at the moment, again they have red buoys out which leaves a channel about 20 foot wide. You can see the silt 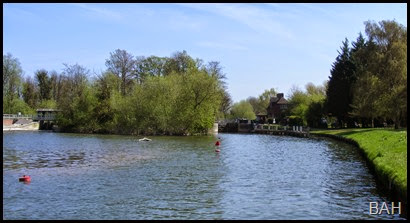 just below the surface between the two red buoys. This has meant that a good length of mooring has had to be closed. It was just passed here where we saw a duck with 21 ducklings, I will say she was a bit bigger than a normal Mallard, some sort of cross.

As you turn sharp left into  Culham Lock Cut the new entrance to the Wilts and Berks Canal is on your right. This bit was dug to be opened at the time of the IWA National at Beale Park, but nothing seems to have happened since.

Through Culham Lock and you are passing Didcot power station. This is a bit like the Wormleighton Radio Mast on the South Oxford, it follows you for miles as you twist and turn going down stream.

A short way passed the bridge we passed this couple in an inflatable canoe, we were to see them again later when they passed our mooring for the night. I do hope they didn’t need to go back upstream. As you can see, she is doing all the work. 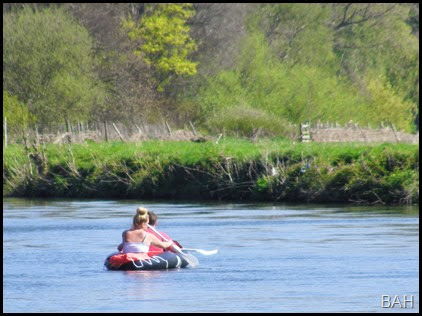 We had some great displays from both Buzzards and Red Kites along this reach. Needles to say the best view of the Kite was almost right at the sun, so no photos of that one. The light coloured feathers under the wing really flashed in the sun light as they twisted about. 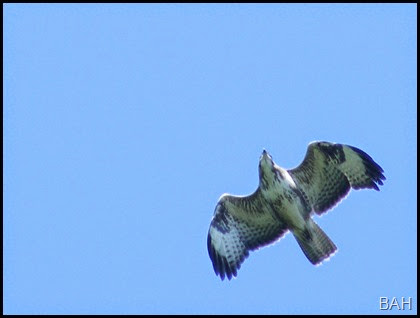 Below Days Lock this Narrowboat had been victim to the floods. He has a note in the window apologising to the farmer for leaving his boat on his field. I don’t think they will get a crane across the meadows to lift it back in. It is still moored to the tree by its stern line. 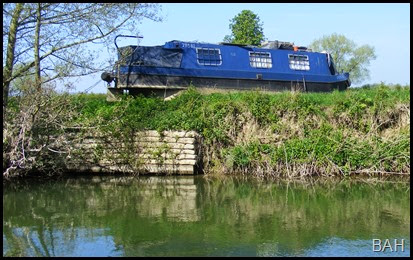 We decided to moor for the night in the mouth of the River Thame. The Thame is flowing quite fast so I decided not to try and navigate up round the bends but just reverse the stern under the bridge and stay in the mouth overnight. The other bank along here is quite high for getting on and off a Narrowboat, but this bit is piled, lined with wood and just the right height. 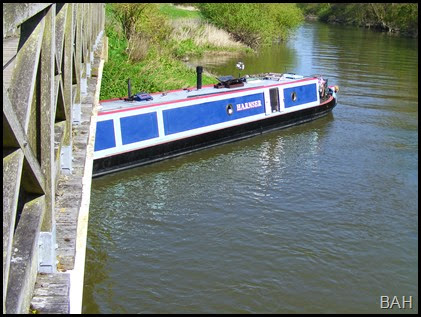 Yes, I did a boat review in Canal Boat of the stealth boat.

Their first boat was a narrowboat then they had the widebeam done in the same style..

I didn't know you did a review of that Adam.. Got a link?

It is worth the walk along the Thame towards Dorchester along the river.. or at least the footpath which sort of takes a shorter cut. The village green is reached. Rather delightful from your end.