Yesterday I not only saw my first ducklings but also my first Swallows of the season swooping around Napton reservoir.

After dinner we all congregated on Harnser to swing the lamp and make sure that the wine and beer stocks had not gone off.

This mooring was a much cooler day and I guess the swallows wished they had caught a later flight, yesterday felt like summer, today we had fleece and jackets on.
We said our goodbyes and departed at our normal 10am. I dropped Diana off at Napton Narrowboats to take the car back to the moorings, from there she would walk down the flight to meet me. I didn’t see a single boat on the move until I met one by the Folly where Diana was waiting. There was a boat just going up in the locks, it was a 70 footer with a Ruston Hornsby 2 cylinder engine. The chap had only just bought it that morning from Braunston Marina and his boating experience was a weeks hire several years ago, so he could be on quite a learning curve. As he was single he had enlisted the help of a friend for the day but he would be single handing to the K and A.

Steve the CaRT supervisor warned us that several of the pounds were down and he was right. CaRT have some serious leaking gates on this flight below lock 14 and it was slow going at times but we didn’t actually bottom out. I think it would have been a different story if the boat behind had got closer and drawn a lock on us. 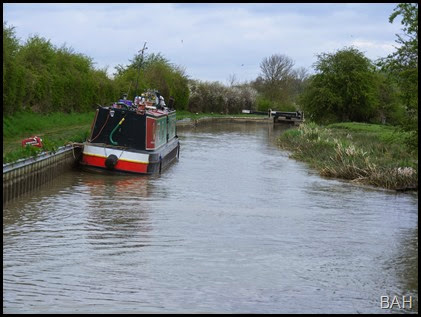 When we arrived at Marston Doles bottom lock Steve the CaRT supervisor had the lock ready for us, he was letting water down to try to refill the flight. The new boater pulled over to moor so they could go to Braunston to retrieve their cars.
There are some new “Old” cars by the top lock, the collection just keeps growing. 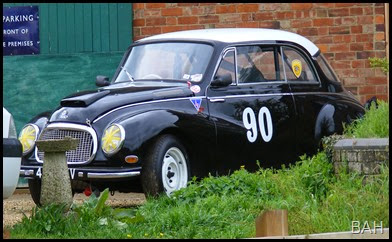 After leaving the lock we soon caught up with a very slow boat, I tried coming up to it well on the left but the chap just held a course even further to the left, he was only doing 2 mph at the fastest and often less. It was some time before I could get close on a suitable stretch for passing by which time he was below having lunch and his good lady was driving, we were going so slow that I was able to ask without shouting if we could come by to which she agreed and pulled slightly to the right allowing me to creep by, and power on and I just pulled the stern towards the offside bank. Eventually the hire boat that had also caught us up got by. We only met 3 boats all the way to Fenny. Just before Fenny I stopped to re-moor an Napton Narrowboat who had tied lose ropes to the top of the pins and only driven them half their depth into the towing path. We then continued on following the hire boat through Fenny and finally mooring for the night Just before the Claydon flight by Glebe Farm.

Although I have seen some ducks I have yet to see ducklings, but I am sure I will see some soon. It must be wonderful having a narrowboat. Greetings from Montreal, Canada.