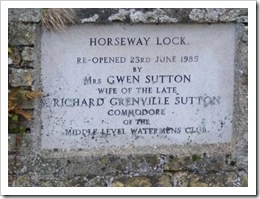 As we wandered round the lock which is in amazing condition considering you can’t use it, I saw this stone set into the off side lock wall. What a shame all that money and effort going to waste. 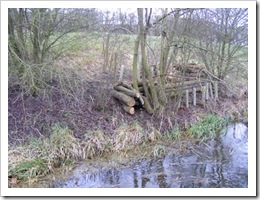 We set off at 9 30 and reversed back the 1.2 miles (from Google Maps) to the junction of the Sixteen Foot Drain and the Forty Foot drain, arriving at 1005 hrs. Just before the junction we passed this Otter holt under construction using cut logs and plastic 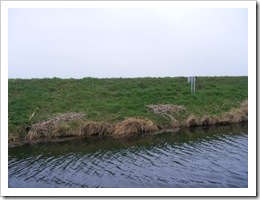 piping.  The MLC have installed lots of Otter holts in the banks but this is the first I have seen made of wood. The others are completely underground with two large plastic pipes leading into them. A fisherman at the junction said that we were the first boat he had ever seen down there. 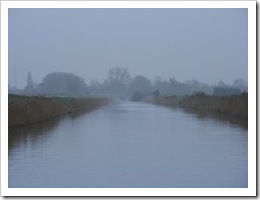 From here we carried on along the Forty Foot Drain right beside the main road, we received several hoots and waves from the passing cars and lorries. The weather was quite miserable and we considered trying to moor near The George at Ramsey Forty Foot but 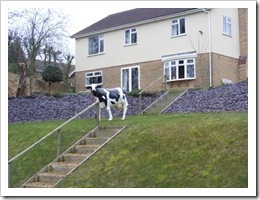 there was nowhere suitable so we continue on through the bridge where a water side house has a full size plastic cow in the front garden, a fisherman opposite told us that they turn it round from time to time.

When we reached the 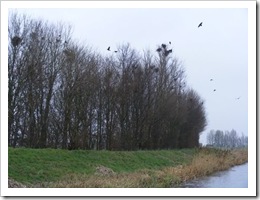 junction of the River Nene (old course) we turned right towards Benwick. On the junction there is a large motor home sales ground with several thousand pounds worth of stock parked at the back. Just beyond this is a very active Rookery with 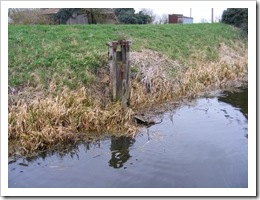 some large nests and lots of birds making quite a racket, not a spot to moor overnight.
This being the course of the old river is quite bendy and unlike the dead straight drains we have gotten use to. Just before Benwick there is an old wooden sluice on the right 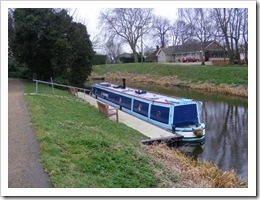 hand side. We have moored for the night on the new public 36 hour moorings. When I say new I am referring to the pontoon which is new, the actual moorings have been here for some time and last time we visited in 2008 we tied the stern  to the trees and put a stake in at the bows, it was then a mater of using the gang plank to get ashore.

Last night after it stopped raining we walked into town to eat. I was all set to go to Weatherspoons but Diana thought the Indian Restaurant opposite  would make a change, so it was the Shah Jahan. I never know what to order so it was the special for two. The only problem is its not licenced so I had to drink J2O. They are very happy for you to take your own drink in with you and don’t charge corkage, it was just we didn’t know. The food was quite mild but very tasty and the portion size just right. When the bill came it was discounted for some reason so effectively the poppadum's and soft drinks were free, I have no idea why.

This morning we were awake early, I don’t remember booking the dawn chorus and ducks so we were on the move before 1000 hrs. We didn’t get far as I spotted a boater we had met at Outwell 4 years ago so we stopped for bit of a chinwag. It was just on 1000 hrs. as we passed the Town Moorings. We carried on along the Old Nene for an hour past the wind farm until we reached Pophams Eau where we turned right to go to Three Holes. We were now cruising down the Norfolk Cambridgeshire boarder. The local IWA branch are negotiating to install some moorings in the area of Three Holes, but I am not sure where. We turned left at the junction along the middle Level Drain` and went a short way towards Mullicourt Aqueduct. It is classed as Not Navagatable so I don’t know how far we could have gone, but we turned after about a quarter of a mile. 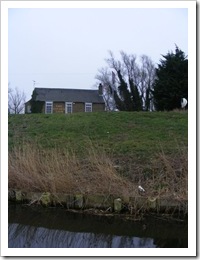 We then headed south down the Sixteen Foot Drain, of plan was to moor outside The Golden Lion pub, we new the moorings were hard to spot but their construction made it impossible for us to get close enough for the dog to hop on and off. so we backed up a few yards and got the bow against the bank. The pub was closed during the day and there was nothing to indicate they did food at night, also the bank was quite a scramble even for us and the road was right along the top so again it would have been difficult for the dog, so we decided to give it a miss until we have more information. 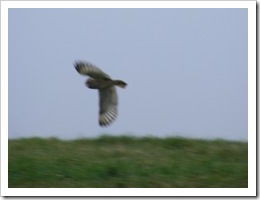 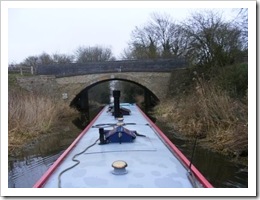 At the end of the Sixteen Foot Drain we turned left along Vermuden’s Drain, again it was the first time we had been down here. It started quite clear and open but much narrower, through an arched bridge which makes a change from the flat concrete or steel structures we have 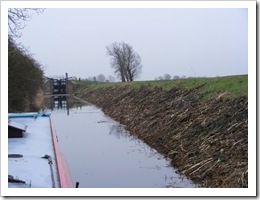 become accustom to, through the bridge there were lots of nice fishing platforms and I made a mental note that one of these would suit us if nothing else was available. Shortly after this the right hand bank had been scraped clear to allow a crawler tracked dredger 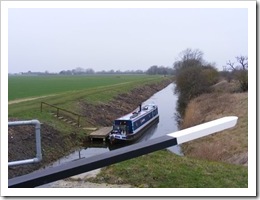 access and this had worked its way right up to Horseway Lock which was helpful. We have moored for the night on the lock landing which like the lock is in first class order. The bottom gats of the lock are chained and padlocked but both end gates are ajar with no level 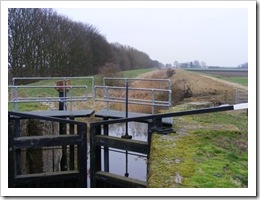 differential. The other side of the lock the cut just disappears into an overgrown mess, so I am sure no one will be wanting to lock through tonight and we wont be in anybody’s way.

We arrived at the boat about 12-30 and I immediately set to refilling the potable water system. This went very well just necessitating opening the main outlet from the tank and turning on the pressurising  pump, after that it was just a matter of waiting for the system to fill, pushing out all the air and pressurising its self. Once that was don’t listen for the pump to keep starting which would have indicated we had a leak somewhere.

The next job now we had water in the system was to light the Dickinson diesel stove, remembering to take the cap off first and putting on the chimney. Things were going well.

Next job fire up the engine, it was November 5 the last time we had her running. When she has stood for any length of time I always operate the diesel lift pump manually before turning over the engine, just to make sure there are no air bubbles just waiting to go into the injector pump and cause problems. Turned the key and it fired up straight away.

We have a pair of solar panels on the roof just to make sure the domestic batteries are kept fully charged. When I switched on the main isolators the domestic batteries were sitting at 27.5 volts. I don’t use the solar panels while we are cruising so I take them off and store them under the tug deck. the are not big enough to put a useful amount of charge in each day so I would rather store them out of harms way.

By 2 PM we were ready to set off, but we wandered down the moorings to have a chat with Anne and Olly before we left at about 1450. We moor noise it the bank and reversing straight out of the finger there is just room to swing the bows round the rudder of the butty moored to the left of us without hitting the far side bank. By doing this we are on our way to March. We met two boats just through the first bridge who both moor at Floods Ferry as we travelled to March where we moored at 1600 on the new park moorings. This is much more convenient for the dog than the town moorings, but are a bit shallow so the bows are in and the stern 3 foot out.

As I write this at 1700 hrs. Diana has walked into town to find the post office and it has just started to spit with rain, needless to say she hasn’t taken a coat with her.