Following a chance comment on our last trip from another boater we met at Denver to Diana, we called into Fox’s Marina by car on our way home to see if the could black Harnser for us.
The comment was that they were supposed to bring a boat to Fox’s for blacking but due to St Ives lock closure overrunning they had to cancel as there was no way of getting there. If they couldn’t get there maybe others couldn’t.

We called in and were in luck, they could fit us in on April 1st and we had to be there at 8 am. but we were OK to arrive the night before and moor in the marina. With this news we continued to drive home and return to the boat the following Sunday.

On Sunday we drove back at Harnser and at 3-30 pm. after loading up I took the boat to Fox’s yard while Diana took the car as we would not be able to stay onboard while the work was carried out

and also one of the Middle Level Tugs Reedhawk which could use a coat of paint.

At least the Commissioners have got round to adding some bollards to their own wharf but as you can see they don’t want you mooring to them. 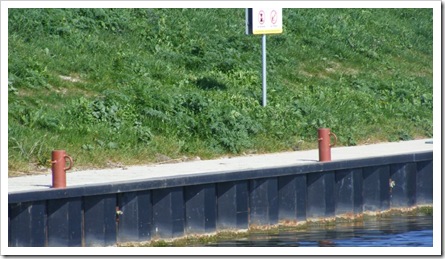 Diana was waiting for me on the bank outside the marina entrance and I just poked the bows in between the moored boats to pick her up. We pushed on through March were we saw this magnificently marked cat sitting in the sun. 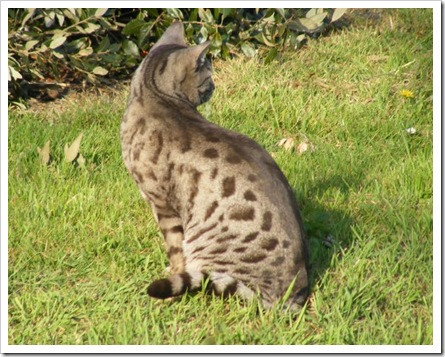 Shortly after March we saw our friends Anne and Olli on there new moorings, until recently they had been moored at Floods Ferry a few slots down from us.
We winded where the 20 ft. river joins the Old Nene, I did try to power round in a tight 360° circle but didn’t quite get it right and had to back up. We made our way back to Fox’s and nosed our way into the marina, unfortunately there was a cruiser moored where we were told to go so instead I puled in against the diesel filling wharf, considering it was early evening on a Sunday and the yard was closed it was most unlikely that anyone else would want to be there.
A quick drive into March saw us with a very tasty Chinese Takeaway which we brought back to the boat, it was almost as good as the sunset that night. 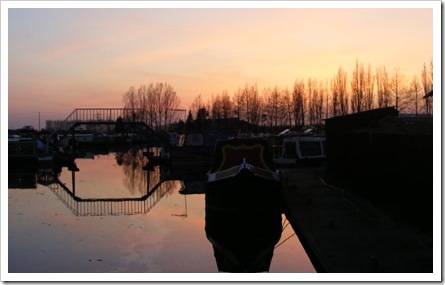 We were up early for us as as we were told to be ready to be pulled out at 8 am. We took Magic for a walk and Fox’s still had one of their boats on the slip. We walked along the path at the side of the Marina where some helpful local has installed some home made pooper scoopers on the bushes for visiting dog owners to use. 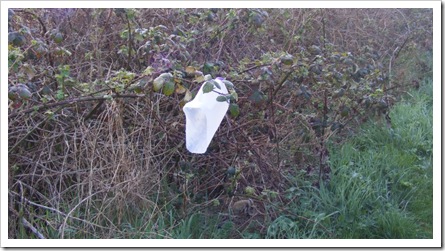 Even so I cleared up 3 extra piles on our short walk. 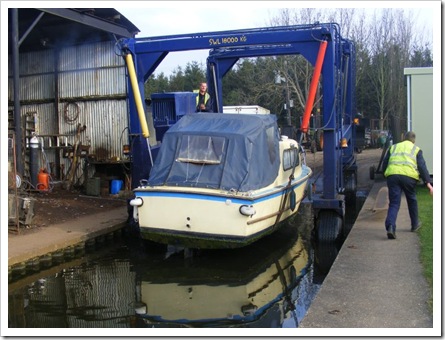 and Harnser was drawn forward onto the blocks. 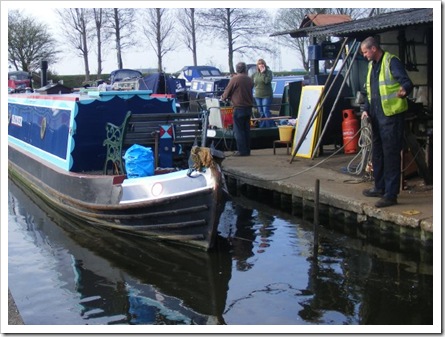 Harnser is ballasted almost level so is deeper on the bow than most boats and this meant that she had to sit in deeper water to get the trailer under the bow, in turn the tractor also has to be in deeper water and the cooling fan was throwing up the water. 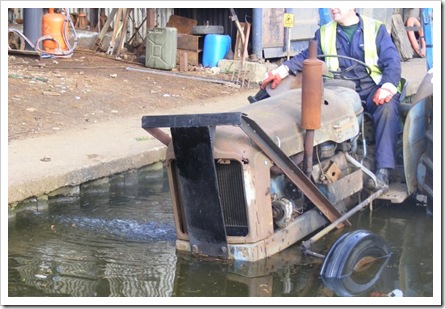 She was soon on her way out and first look things were quite good. 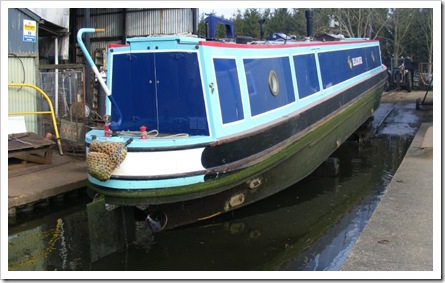 The anodes still had a few years use in them yet and things generally looked pretty good. 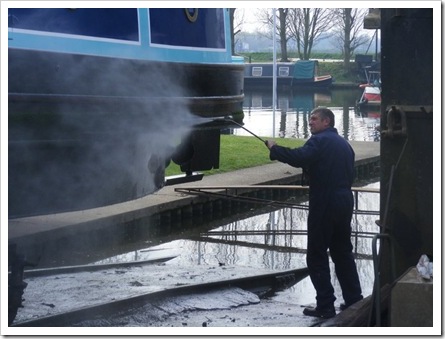 No sooner was she out and they set to cleaning her down, Fox’s also paint the base plate, well all except where she sits on the cross beams of the trailer. 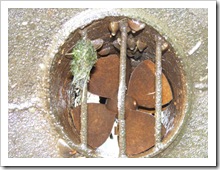 There was a bit of a mussel colony 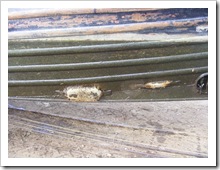 setting up home in the girlie tube and the original anode on the bows was well past its sell-by date after 10 years underwater. lack on. At this point we left the boys to it cleaning her down and putting the black back on, we would return on  Thursday to take her back home.

We left home in good time to get to Fox’s at about half 8 to take Harnser back to her moorings. When we arrived we found that she was back in the water but the office didn’t open until 10 am so we couldn't pay the bill and leave, so it was off to Tesco for a second light breakfast. We returned to the yard and paid our dues but before we could leave we were asked if we could assist in the stability tests for their new day boat. This involved us all being weight and then all sitting in one side of the boat. This was to be repeated on both side another 3 times, so we had to excuse our selves and leave. Diana took the car to Floods Ferry while I took the boat back to our moorings. as I arrived I saw Diana driving in, but by now there was a good breeze blowing straight down the cut from behind me and this made turning through 90° into our slot shall we say, interesting. It was then a quick drive back to Norwich and pub lunch before I attended a Broads Forum meeting in the afternoon.