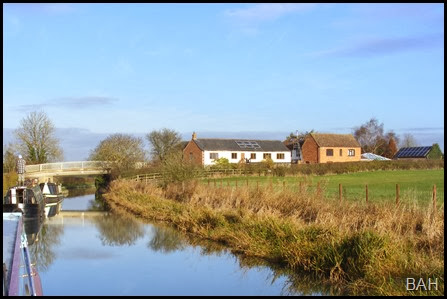 We left the mooring at 10 am and Diana spotted this chap sitting on a canal side fence post. He had been there when we moored up but the light was to poor to get a photo of him. He is obviously very use to people on boats. 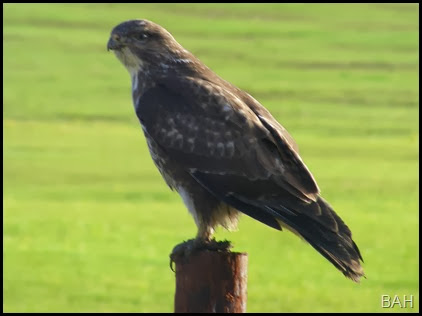 The canal was quite busy and we met several boat as we headed northwards.

There are a lot of boats in Barby Marina now and one of them is a wide beam so I don’t know if risked coming up from Braunston or was craned in.

Approaching Hillmorton we could see a lot of construction work going on the the right which we suspect is by the railway. 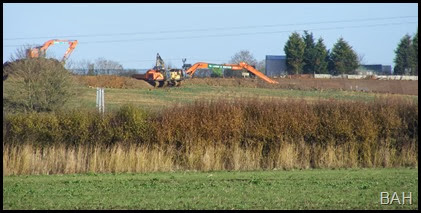 The long term moorings above Hillmorton locks were almost empty, one boat by the bridge who was having insulation fitted to his boat, the company had their van on the road. A strange wide beam vessel which I understand is half a catamaran who normally floats around Wigrams Turn area and one other boat. There was a boat just leaving the top lock, but he didn’t see me so shut the gate, I was so close I had to go on the lock moorings to let him by. At Hillmorton Bottom Lock there was a boat moored on each of the lock moorings above the lock, but I have come to expect this.

We stopped a Rugby to visit Tesco, there was only one other boat on the 14 day moorings, never seen it so quiet, there were a few on the park on the offside which I see is now only 24 hour mooring.

Newbold Tunnel now has 3 out of 27 working, one of each colour. The 14 day moorings at Newbold were full but the 48 hour empty.

The moorings just north of Lime Farm Marina on the offside now have another new mooring dug out of the scrub. 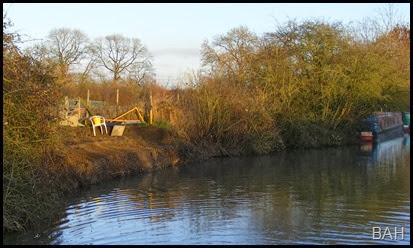 By now the sun was getting lower in the sky so time to start looking for a mooring for the night. Passing along All Oaks Wood the sun was out of sight so we stopped on the first piece of piling after leaving the wood.

Lets hope tomorrow is as nice as today.

Well what a pleasant surprise last nigh was. We walked to the Kings Head at Napton, its only about 5 minutes from the canal and they were pushed to find us a table. Its a Hook Norton pub so I expected the beer to be OK but I wasn’t sure about the food, our last visit didn’t want to make us hurry back, but what a turn around, a very good menu backed up with two very good meals, I can’t comment on the sweets as we didn’t have room for them.

This  morning we woke to(in no particular order) Ducks nibbling the weed, cars blowing their horns crossing the bridge, planes, helicopters and the sun shine.

We didn’t set off until 11am and again very few boats moored in the usual places, a few around Flecknoe but only one on the Puddle Banks and non opposite the long term moorings south of the Puddle Banks. We passed one unusual boat, a cruiser stern that has had the cabin sides extended to make it a sort of semi trad cruiser. 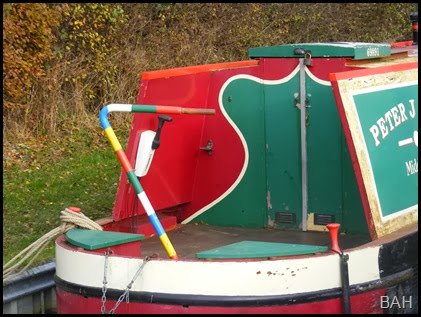 Although we started off in the sun shine it wasn’t long before it started to rain, but it only lasted half an hour.

We called into Braunston Marina for a pump out £12 DIY but that machine really sucks. Then back out and a coffee on Matilda Rose before heading up the North Oxford as far as Willoughby where we have moored for the night.

Well we are back aboard for a few days. It was dead on 2pm as I backed out of the Engine Arm onto the main line. A nice man from CaRT set Napton top lock while Diana took the bags from the car onto the lock side.

The CaRT chap was there as he suspects that the heal post on the nearside bottom gate is snapped, needless to say all the rest of the flight was against us.
I think this is the first time I have ever been down the flight and there not been a boat moored in one of the pounds. There were only two below the Folly Pub.

It looks as if the Lock Cottage by the bottom lock now has vehicular access, they have a drive way running down to a gate onto the entrance to The Folly car park. We actually met a boat on the move between here and The Bridge pub. Again very few boats moored, only 3 and one of them was a hire boat. We moored with a view of eating at The Bridge, they have all the signs out but the place looked deserted, the only lights on were the exit signs and none of the tables laid, also the bins were all empty so it didn’t look good. Working on this information we moved down to bridge 109 where we managed to tuck in to the piling for the night and will walk up to The Kings Head instead.