Yesterday we obviously set off 4½ hours too early as we had not been moored up long and the weather bucked up to a nice afternoon and evening.

This morning boats were passing quite early, I expect they had been holed up yesterday in the rain and were making the best of the fine weather. We set off about 10 am and passing the Tame Otter pub were surprised to see every mooring empty, again I can only guess they were hold up there all day yesterday and moved on this morning.

We stopped at Sutton Road Bridge at Fazeley to visit Sainsbury’s, not something we have done before, but its very convenient and only a 10 minute walk, there is also B&Q Maplin’s, Tool Station and lots of other outlets in the area. 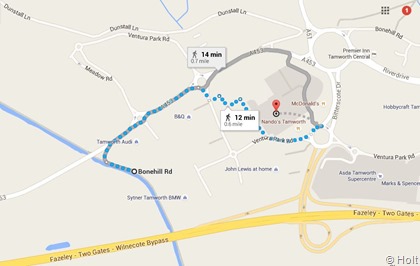 After lunch we continued on to Fazeley Junction where we turned sharp right up the Birmingham and Fazeley canal. I stopped just through the junction to take a photograph and got my toe bitten by a Swan with 5 Cygnets, no sign of dad. 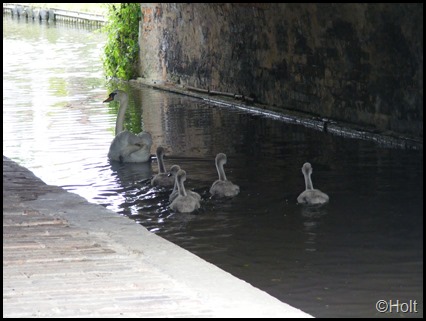 We continued up the B&F with Diana steering to the winding hole just before the locks, I think its the first time that Diana has winded the boat before coming back towards Fazeley to moor for the night near the Gravel Pit Bridge. 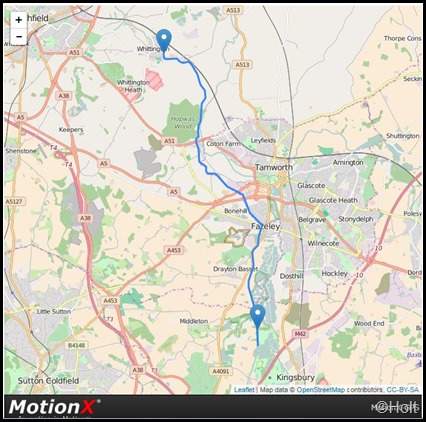 Well it rained most of yesterday evening, I did take a walk between showers and there was only room to moor a 45 foot boat between Alrewas Lock and the winding hole the other side of the village, its a popular stopping place.

We woke this morning to the sound of the rain so were in no hurry to get up of started, Diana decided she needed to go back to the Co-op so we finally got away at 11-35 am. in the rain. we were following another boat so both Bagnall and Common Locks were against us, but we did have one coming down above Common so no need to stop and close up, all the rest, thanks to oncoming boats were with us.
Yesterday I posted a picture of the Apes in the trees along this stretch of canal, today I noticed that there are also skeletons. 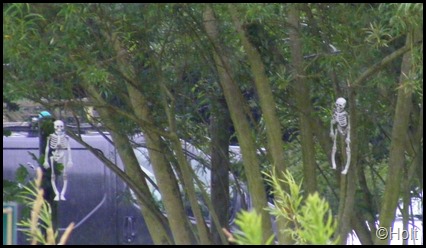 We stopped to fill with water at the Fradley CRT centre between Keepers Lock and Junction Lock, no Volockies on duty today. The tap is definitely one of the slower ones on the system. Up through Junction Lock and hard left onto the Coventry Canal passing through the small Swing Bridge. CRT did say they were going to fit a lock on this bridge but they seemed to have dropped the idea now. Just passed the water point we passed a moored boat called Song of the Waterways, this use to belong to the late Jeff Dennison song writer and singer of waterway songs. 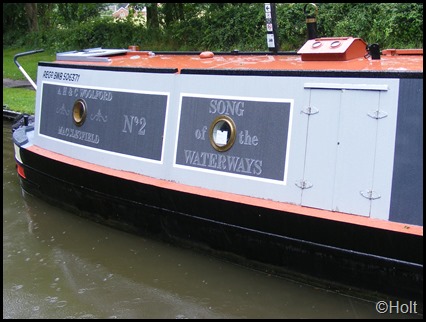 As you can see its still raining.

We pushed on meeting several boats including passing a ex working pair on the wrong side at Streethay, well it looked easier all round to do that. The rain eased a bit and even stopped for a few minutes as we continued on to Whittington to moor for the night. The back end of the boat is on the Coventry canal and the front end on the Birmingham and Fazeley canal, this is what we see looking out of the galley side hatch, O and its still raining. 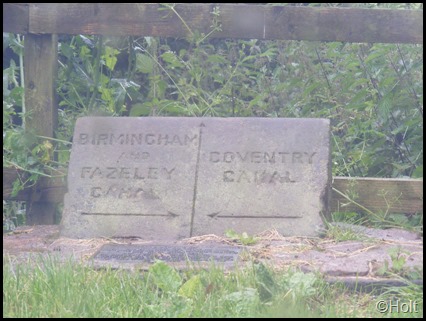 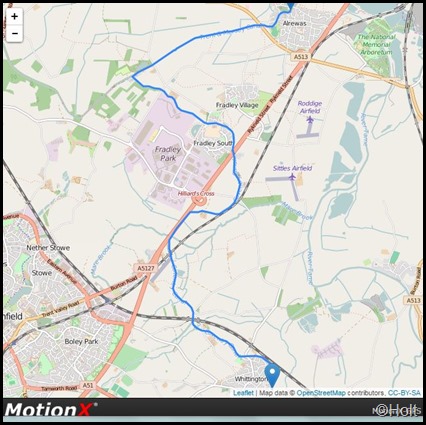 It was quite a short pound we were moored in last night and we were the first boat passed the lock moorings so we were buffeted around this morning when boats started moving up and down the flight. The first job was to cross the canal to the CRT facilities on the other side and dump the rubbish before setting off down the flight.
It was 9-50 am. when we set off and the Volockie was already hard at work at keepers Lock. He told us that the Volockie at Shadehouse Lock had found a lad there helping boats through and demanding money for it. Just passed Keepers lock we met a boat and he called out “Are you the Harnser from Floods Ferry?” so we obviously made an impression on the Middle Level. 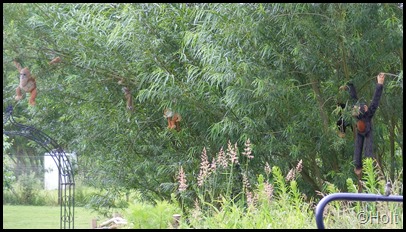 As we approached Alrewas  Lock we found it being worked for us, It was another ex moorer from Floods Ferry, Ray with his Staffy, Bones. The other boat who had recognised us rang Ray and told him we were coming so he had the lock ready for us.

The River Trent level was well into the green so no problem there, we headed down stream to Wychnor Lock which was against us, so after turning the lock and locking down Diana waited by the lock for my return, I was only going a few hundred meters to wind before returning, but just after leaving the lock I met the boat that had locked down before us coming back, so Diana helped them up the lock before turning it again for my return.

At the lock was a notice warning of dredging being carried out on the canal, I am not sure where they are dredging but they are removing the spoil just prior to the winding hole and a tug had 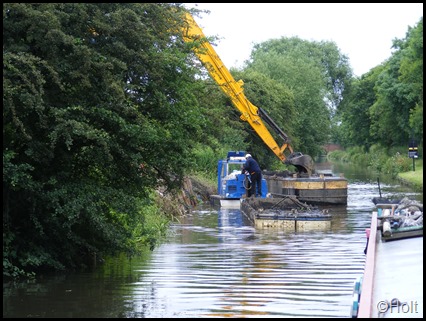 just arrived with a full hopper and was unhitching it ready to take the empty away. They waited while I passed and winded which I must admit was not the neatest turn that I have ever done.

I returned to the lock just as Diana opened the bottom gate and we were soon up on the river again our destination Alrewas. Finding a spot on the 48hr moorings we pulled in on the last bit of straight bank just before the forecast rain started.

After lunch we wandered into the village, first stop buy the home made pickles and Lemon curd from the house gateway, then onto the butcher for pies and sausages followed by the Co-op for other odds and ends, by now the rain was just a light drizzle. Since we have been here boats have been mooring around the bends so the village must be quite full.
For the pub lovers the George and Dragon is closed and they are looking for new tenants if anyone fancies it. 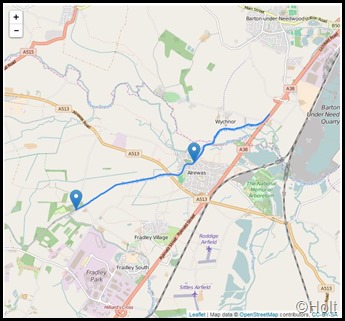 Well we are on the move again, we have been onboard for a week in the marina doing some internal painting as well as visiting Lichfield and my daughter.

We left the moorings at about 2.30 pm and exited the marina just as a small boat coming by so it was a slow run to Wood End Lock meeting several boats on the way. When we arrived at the lock the boat ahead was still waiting for an upcoming boat to leave the lock so he must have caught another boat up. Wood End Lock is somewhat slow because the top ground paddle has been out of use for some time. Also at the lock was a CRT operative and she was counting the boats passing through the lock, she was adamant the paddle had only been out of action since April but a boater coming up insisted it was last October. It loos as if it will be like it until next October because they need a stoppage to fix it. Once on our way again we were to meet two more boat before we arrived at Shade House Lock. As we approached a boat was leaving but luckily the Volockie saw us and left the gat open before going off duty. Middle lock was against us as was Junction Lock, but we were able to leave the gates open for a boat coming up. There was a mooring spot just big enough for us between the lock moorings and the first moored boat so we have slipped in there for the night opposite the CRT services. 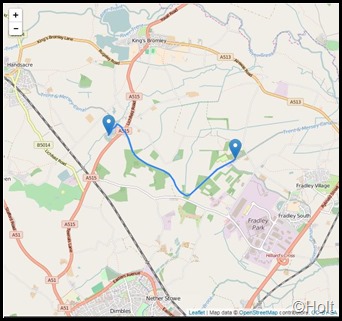