Well last night didn't go quite as planed, about half seven we went up to the pub only to find that the chef was feeling unwell and had gone home at seven, so no food. We went back to the boat for a think, no other pubs in the area but a couple of takeaways that offered delivery. I rang Eastern Spice who were happy to deliver to the pub for us at 9 o'clock so it was back to the pub for a beer and wait for the food. The barman did say we were quite welcome to eat it in the pub if we wanted to, but it was easier to take it back to the boat. For £18-50 for a set meal for two we were more than happy.

Being moored down below the pub I think we were well sheltered from storm Eleanor and I only recorded a maximum gust of 31mph. we were also well away from any trees.

This morning we made an early start for us heading back to the marina, the wind was still a bit gusty but nothing to cause problems.

Passing through Marston the retirement chalet village is expanding somewhat, looking at Google Maps there look to be well over a 100 chalets on sit already.

Crossing Wincham Brook there was moor water in it today than there was yesterday afternoon with the land around it flooded.

There wasn't a trace of steam today when we came through the Tata Chemical Works, but it looks as if some new pipes have been moled under the canal just to the south of the works, I don't think this is anything to do with Tata but probably one of the utility companies. 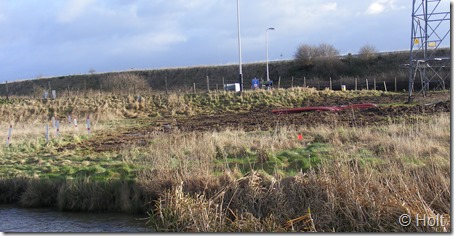 Back at the marina I had to make the decision of whether to sail straight down to out mooring or reverse down as normal, by now the wind had picked up again hitting over 30 mph. but it was coming almost straight up the pontoon, so I literally winded by the end of the pontoon, it took quite a bit of power to push the stern against the wind, but as I did the bows weathervaned round so we were almost in line with the pontoon, we had to pass a couple of boats where Diana had to lightly fend the bows off.

Once moored it was a case of taking things to the car which Diana did while I drained the fresh water system.

We had just over a fortnight onboard and in that time we covered 138 miles and passed through 58 locks. 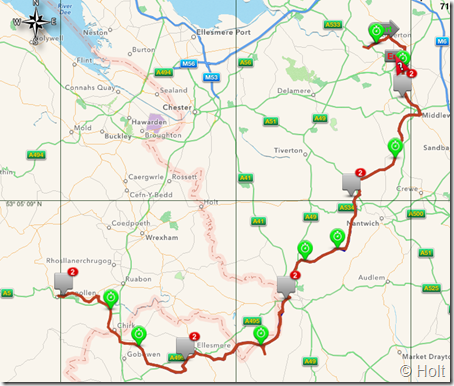 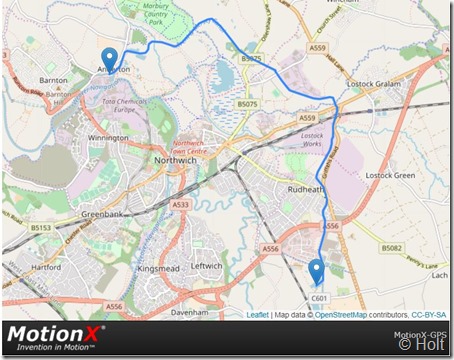 Our journey home from the marina was not quite so straightforward, as we drove south along the M6 there was a traffic announcement that a car had left the carriageway travelling north but it wasn't causing any hold-ups, so when we passed a notice saying queuing after junction we assumed it was rubbernecking causing a hold up on our side so carried on, wrong. It was a multi vehicle collision on our side completely closing our carriageway and for a time they closed the other carriageway as well as there was no oncoming traffic. When we finally passed the site of the collision there was a well smashed up car and the remains of another which was unidentifiable right against the crash barrier.

It was a filthy evening yesterday with cloud and rain, however it cleared before we went to bed so we had a chance to look at the big moon, to me it looked very similar to the one I saw last year, ie. Sunday night. I tried to photograph it but my camera just isn't interested in that sort of shot.

We woke this to the rain this morning, just as forecast so we didn't set off until 11 am. We were considering just going to the marina but the weather improved so that was postponed, I did have to put a mac on for a couple of showers but that's all.

Every time we pass this tree I think I must photograph that and today I did, but the light was all wrong. The branch starts off one way doubles back on its self, gets embedded into the trunk and then goes the other way. 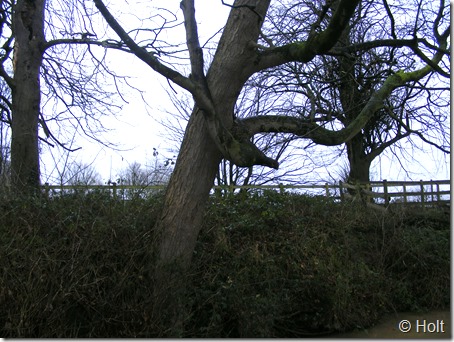 The work at Oakwood marina is pushing on and I expect there will be boats in there this year. It looks as if they will probably get 3 to each pontoon. 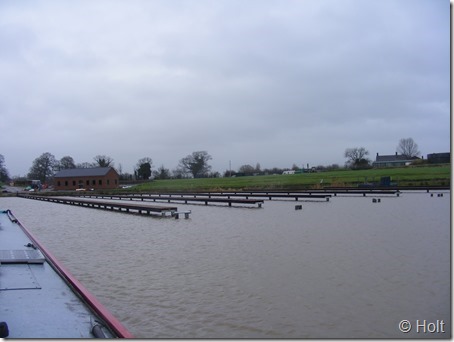 Boaters have very mixed feelings about what are classed as pram hoods that are often fitted over the stern of a cruiser sterned boat, well someone here has found a novel use for one. 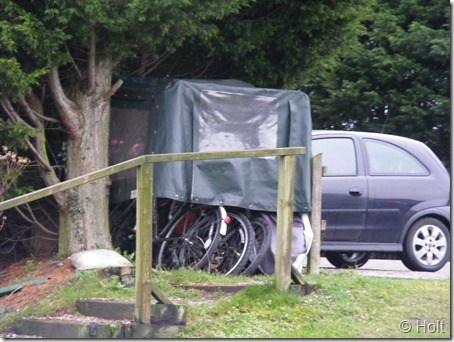 Coming through the Tata Chemical works there was plenty of steam about, I guess this was due to the high humidity and cool temperature, it was just

rolling of their ponds and cooling towers. 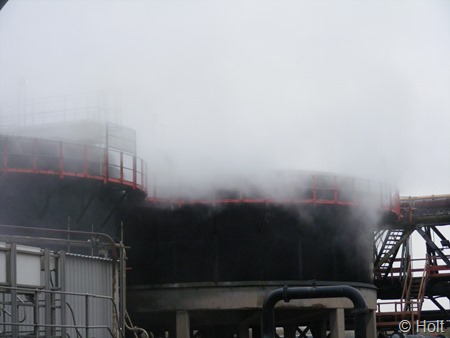 We stopped at Anderton services did a bit of recycling both depositing and collecting from the rubbish bin as well as using the new upgraded facilities, loos and topping up with water. Then it was on passed Anderton Lift and through Barnton Tunnel to wind before returning to The Stanley Arms where we will eat tonight, it will be the first meal out this trip and they have their own moorings, this point is extra inviting as its raining again and its only a quick walk up the steps from the boat to the pub. 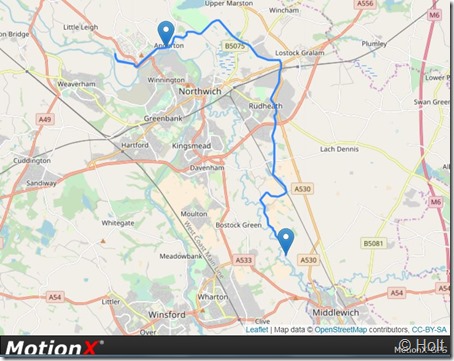 Well yesterday evenings rain cleared up before midnight so we were able to see the New Year in with a glass of Port and watch the fire works in the distance before creeping off to bed. Even then we could hear the bangs well after midnight.

This morning started quite well but soon turned dull and overcast. As we set off you could see rain on the canal ahead, but nothing falling on me or the towpath, thankfully it didn't last too long. Again we met a few boats and caught up with one at Stanthorne Lock.

The river Weaver was down quite a bit since we came by almost 2 weeks ago, its all within the banks now. 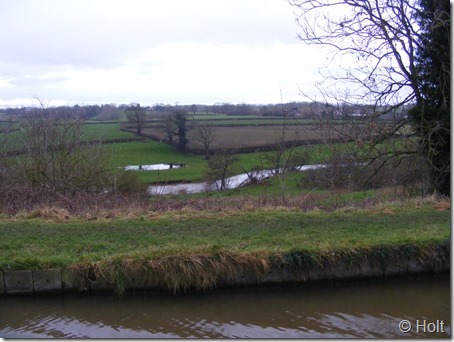 I have my doubts they will ever make this stretch navigabile, its very bendy and subject to flooding at times of heavy rain.

As I said we caught up with a boat at Stanthorne Lock, it was a couple with their two young grand daughters and they were trying to draw the bottom paddles. Now I am all for getting young kids involved but this did worry me, as Grand dad went from side to side helping each one to wind the paddle a bit, at one point the smaller one had her hands above her head trying to pill the windlass, if something had have slipped I hate to think what would have happened. They apologised for holding us up which wasn't a problem. As we came into Middlewich John popped out for a chat and wish us happy New Year while the boat ahead dropped down Wardle Lock. When we arrived at the lock we found they had kindly drawn a paddle for us so the lock was just about full. We were able to thank them on the Trent and Mersey as they had moored outside Middlewich Narrowboats for dinner. Well there is plenty of room along there now the yard has closed down. The three Middlewich locks were against as was big Lock but that was almost full. While I waited for the lock I was buzzed by a Drone, no doubt someone's Christmas present.

Not long after leaving Big Lock it started to rain, on me this time so just passed bridge 176 we moored on the convenient mooring rings, We did consider going on to Bramble Cuttings, another couple of hundred yards, but here we are completely clear or trees etc. Since we have been here the wind has picked up again with some quite good gusts coming through every now and again to give us a little shake. 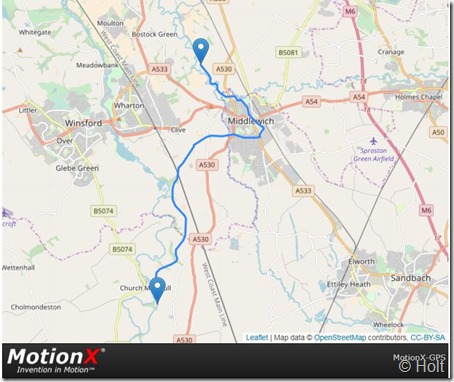