Last nights mooring was quite good considering how close we were moored to the railway, motorway and town.  Again several boats had passed before we were about. 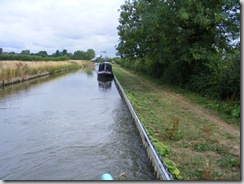 All week we have been playing leapfrog with a boat called Guelrose and this morning they passed just as we were getting ready to leave, so we waited a bit and then followed them at 9 45 am. Needless to say we caught them up at Grants lock even though I was travelling very slowly.  The next pound was quite long so again I tagged along at a slow pace, mistake, at the next lock there were two more boats ahead of us who had pulled out between us, Guelrose was long gone. We carried on with two boats ahead until we arrived at Nell Bridge where there were 4 and Guelrose was still waiting. It seams that a boat was unable to close the lock gate and had been poking around for an hour without success. When Guelrose arrived they cleared the debris and things started to move again.The boat ahead of us had to be back at Braunston on Sunday, so they winded and went back. By now we had got chatting to the boat behind who were heading to Bath.
As we approached Aynho Weir lock there was only one boat ahead and they had just entered the lock as we reached the lock landing, this is some way back from the lock because the river Cherwell crosses the canal just above the lock and flows over a weir in the towing path, this is crossed by a bridge. If there is any amount of flow on the river this can lead to a tricky cross current just as you go under an accommodation bridge at the head of the lock.
By the time we had turned the lock and entered the boat that was following us were almost here and as there were no boats waiting to come up we decided to wait for them in the lock as due to the shape of the lock it can accommodate two boats with ease so long as they are less than 60 foot.

The walls of the lift bridge as you approach Aynho have now been rebuilt so I expect a new deck will be fitted one day. 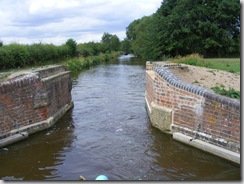 We continued through the double row of moored boats to Somerton Deep lock where again we caught up to the boat ahead. This is a Wyvern Shipping boat that is doing the Thames Ring, I think the crew are Dutch, but needless to say speak better English than what I do.

By now our overnight mooring was close, we planned to stop at Somerton Common and were pleased to see several vacant lengths of piling, we passed a boat moored in the middle of the first section and spotted a frame generator sitting on the back deck so we moored right at the end of this section of piling, since we have been here boats have moored between us so hopefully we will just have the noise of the trains tonight.

I was at Kitlington today and just whilst I was walking the dogs saw at least 5 boats go by. Normally, I am lucky to see one.

I like the addition of photos - we are honoured.