Well we had another 6mm of rain according to my gauge last night, so that is 16mm in two days. Its nor surprising the Thames is back on yellow boards.

First job this morning was a walk into town for a bit of shopping. Following the mandatory Tesco visit I picked up 5lt of Classic Engine Oil at Wilco’s for £16 a can.

We finally set off at 1045Am in overcast and slightly drizzly weather to leave these rather nice 24Hr visitor moorings. 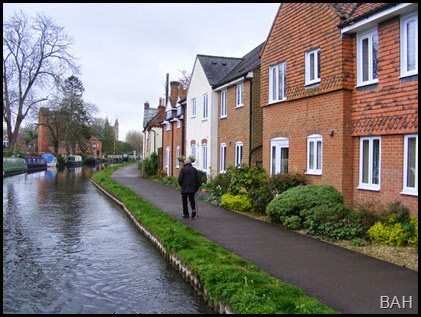 At the first lock we came to a gent with a dog opened the offside gate as Diana opened the near side one, once in the lock he closed it again, I put this down to being a helpful dog walker. What happened next surprised me, he walked to the top of the lock and took his adjustable spanner out of his pocket and proceeded to slowly raise the paddle. As I left the lock I raised the point with him, to which he told me he was the “Bailiff” for this stretch. Further questioning brought forth he was the fishing bailiff.

The next lock was supposed to be  empty with.the bottom paddle up. It wasn't, the paddle was down and the lock quarter full. Diana drew the paddle and it was quickly obvious there was a problem, water was spewing in under the top gate so she wound the paddle down again. At this point the chap of a boat moored further down turned up, demanding that we draw the paddle or the pond below, all quarter mile of it would drain through the leaking gates at the next lock and he would be on the bottom, all within half an hour. I let him rant a bit, raised the paddle and he quietened down. The pond above the lock was nothing but a muddy ditch as it had all leaked through the top gate and left via the raised paddle overnight. Once he had calmed down we found out CaRT had been informed and that there was a branch jammed in the top gate. I suggest that as there were now 3 of us if we refilled the lock we may be able to open the gate and remove the obstruction, which with a bit of fiddling with a pole I did with ease. By now it was obvious that the pound was rising, so we turned the lock with the top gates sealing and worked our way through. Our new friend was by now full of apologies for his earlier attitude. I think when he said that I had not been boating long and Diana mumbled something about 30 years which he may of heard could have had something to do with it.
We crept slowly up the centre of a slowly filling channel expecting to find CaRT at the next lock letting water down. What we did find was another boater letting water down so he could get down himself and he had been at it for 2 hrs. Just as he cleared the lock a CaRT chap turned up, so I explained what had happened and left him to drop another half meter of water down.

We continued upstream meeting a few boats on the way as far as Kintbury. Here we found not one but two boats moored on the lock landing. 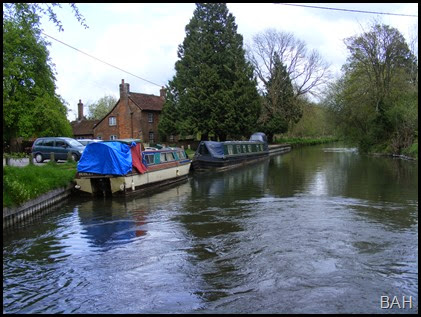 Once through the lock we filled with water at a rather slow water-point when it started to rain properly, just above the water-point there is a long length of visitor mooring and about half of them were vacant, so just before 3PM we slipped into one of them for the night, the only problem is that it is VERY close to the railway line.

The railway line gets ever closer!!