Last night we went to The Five Bells which was a bit disappointing. The general atmosphere of the place was quite dismal with light fittings that had no shades and more importantly no beer on the pumps, only pressurised stuff and ice cold larger, if I want to drink bottled beer I can do it much cheaper and more comfortably indoors. The food however that we had was very good and I must admit it came as a pleasant surprise. We both had stir fry spicy beef that was both tender and tasty.
We found the moorings quite noisy with a road both sides of the cut, it was a mixture of cars and lorries overnight and then tractors and trailers speeding through early this morning.

We didn’t get away until 1040 this morning, we took Magic for a walk first and came across 3 lovely pear trees growing on the side of the road beside a field, we stopped and picked up a few fallen pears but they are not ripe yet. By now the 4 boats that had joined us last night after 6 pm had departed and just as we left another boat arrived to take our place.
A phone call to Maureen to tell her we were on our way was only answered by the answer phone, so I guess she was out locking the other boats down. When we arrived at Marmont Priory Lock it was empty and while Diana 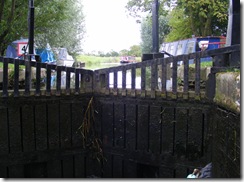 rang the bell for the lock keeper I closed the bottom gates, we had drawn the top paddles before she arrived with 3 nice bags of ripe plumbs in her hand, one of which we bought. As we were leaving the lock another boat appeared behind us.
We were now back on the old River Nene which is both wider and thankfully deeper. 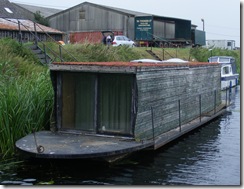 A short way past the lock are some farm moorings, one of the house boats moored her is a bit unusual as it has a Sedum  roof on it, still the owner has a good supply of water to keep it moist. 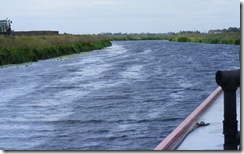 but by the time we reached the wind turbines the conditions had freshened quite markedly and we were pushing straight into a good headwind. 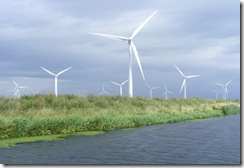 The turbines closest to the water were quite audible with a slow steady beat in time with the vanes passing the pillar. I am  glad I don’t live next to the ones at home.

We decided to moor for the night in March and there was about half a boat length free on the Town Moorings so with the use of a centre line and a spring holding the bows both in and back from the bow of the cruiser moored ahead of us. They may be more space the other side of town, but once you are passed and there are no other spaces it a long way to the next mooring.

We were securely tied up by 2 pm and wandered off into town to find where my mother was born. The house she was born in has been demolished and rebuild but we were able to find the premises where my Grandfather was an apprentice grocer which is now an estate agents.

Brian, I am missing your posts about yout trip. Are you OK?
Ann

Fine Ann thanks, we are back home and I will post the last one today sometime.
Brian