Last night I expected the wind to die away with the setting sun, I was wrong, it blew all night and at some time we even had a little rain.

This morning we woke to bright sunshine and the wind had moderated quite a bit but it was still breezy and it strengthened as the morning progressed. After ringing my grandson to wish him happy birthday we were on our way, back up to The Old River Nene and then sharp right at the wind farm. Yesterday I had rung the lock keeper at Marmont Priory to tell we hoped to be there about 10 30 this morning and as I only got her answer phone I left a message. What I failed to tell her in that message was my direction of travel and about quarter to ten this morning she rang me back with the news that she had a boat coming down 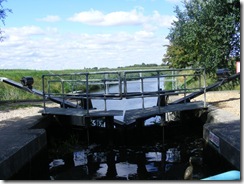 about then so everything should be set for us. In the event we arrived about quarter past ten just as the other boat had entered the lock. Maureen the Lock Keeper was able to give us information about shopping in Outwell, I doubt we would have even looked for a shop without her information.

At Marmont Priory Lock the water way becomes Well Creak, but it is still the old River Nene and is quite a bit shallower than the rest of the Middle Level, also the water level is much closer to the top of the banks which means that the view is much better. 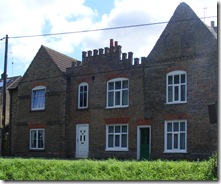 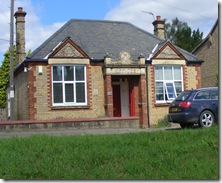 As you progress through Upwell and Outwell, the villages run into each other there are some very interesting old buildings along the banks. 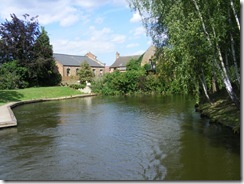 We stopped in Outwell in what is known as The Basin, here there are free 36 hour moorings provided by The Well Creak Trust on the left. I think it would be possible to wind a 60 foot Narrowboat there, I did try it with Harnser just to see if we could get round. 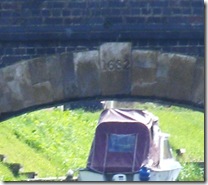 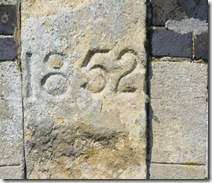 You pass under a bridge just before the basin, it is one of the few arched bridges on the Middle Level and interestingly on the south Key stone it inscribed 1852 and on the north side one it is 1682 After a bit of shopping we decided to continue to Nordelph and wind there where the un-navigable section of Popham’s Eau joins from the right.  On our return journey we noted that the staith on the right was actually a public staith, again with 36 hours mooring. It is right beside the main road but in the middle of

nowhere about half a mile from Nordelph. This was before we crossed Marmont Aqueduct which was back pumping from the lower Middle Level Drain up to Well Creak

On the stretch between Outwell and Nordelph they were busy 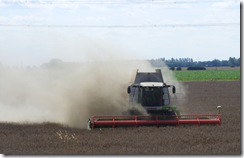 harvesting, I am not sure what they were cutting, it looked far to dark and brown for corn and far to short for rape, but the amount of dust coming from it was out of this world, its a good job the driver sits in an air conditioned cab, unlike my days when you sat on the front with a hanky round your mouth and a pair of government surplus orange goggles. 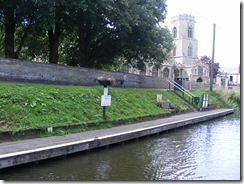 Once back in Upwell we moored for the night on the very pleasant town moorings beside the church, again these are free 36 hour moorings sponsored by The Five Bells pub where we will visit later 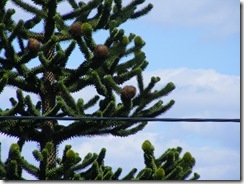 Question for today is this the fruit of the Monkey Puzzle Tree and would it germinate in the UK.