Last night we ate at Oodles n’Oodles again before heading back for another peaceful night at the Star City Moorings.

Again we had rain overnight but woke to a beautiful blue sky and sunshine. We set off at 9 am and although bright it was quite chilly, I made a real pigs ear of coming out of the Grand Union 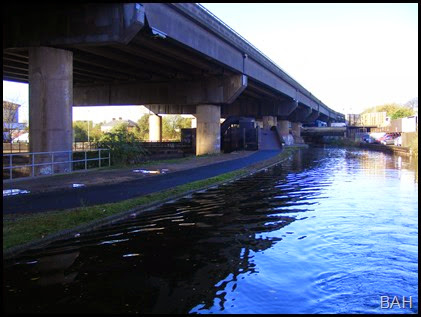 and turning right on the Birmingham and Fazeley canal and had to reverse back into the Grand Union for a second attempt. I don’t think anyone was watch but it still went wrong.

At Minworth Top Lock we had to drag a plastic road barrier out from in front of the lock gate, we had just got it out, they are made of Polypropylene and designed to be filled with water to weight them down, floating in the canal this one was full and we had to drain it as we pulled it out. We had just managed this when three chaps turned up clearing the rubbish from around the lock, if only they had been five minutes earlier. The next 2 locks went without incident but were unfortunately empty.

By the time we reached the Curdworth it was warming up and the afternoon was spent with no coat on. Curdworth tunnel roof is just one mass of cobwebs all inter joining.

Curdworth top lock was full, maybe our luck was in, but no, whoever went down last failed to fully close the top paddle so it had filled over night. Lock 3 the bottom paddles were up and Di walked to the bend above lock for to make sure some one hadn’t set ahead and could see the lock below all had the bottom gate open. Once through lock 3 we could see a boat coming up 5, he seemed very slow and then I realised he had a butty. He walked up and explained he was towing so would be a little while and I suggested that maybe he shouldn’t set so far ahead and round a bent, MISTAKE. It turned out that a hire boat going down had left all the bottom paddles up all the way down the flight, so I had to apologise, I even walked back and set lock 2 for them and we helped them up the other locks as well, The butty was “Olive” but I don’t remember the name of the motor. After they had passed we had a good run all the way to lock 9 with the last 3 being against us.

Maybe some one does read my blog.
You may remember on our way out I posted about the Birmingham Anglers association nailing their sign to a sculptured post below lock 7. Well its been removed, so well done them for sorting it out. 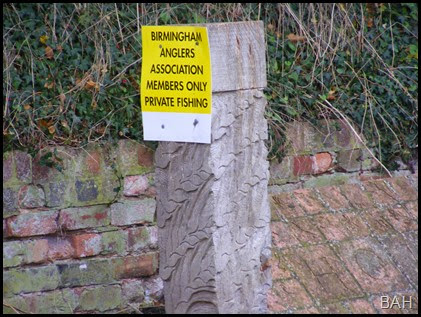 CaRT contractors cutting the offside overhanging trees have got as far as the middle of the bottom pound and they are chopping through some quite heft stuff. 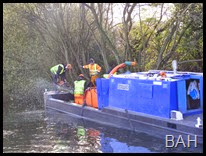 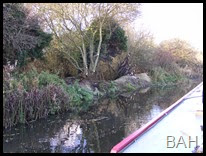 At the bottom lock there was another gang installing steel bollards along the lock side, I assume they are to prevent cars going into the lock, but they are ugly square galvanised things.

I have seen much better street furniture about than these. It seems a shame in what is quite a pretty setting in front of the cottages and lock side.

By now it was getting a bit cooler as we passed a group of ramblers making their way along the towpath, I don’t know how well the leader had researched the route as he spent a lot of time consulting his map.

At Fazeley Junction it was hard left still on the Birmingham and Fazeley canal even if we are the other side of Fazeley heading towards Fradley. A brief stop at the CaRT offices at Peels Wharf to fill with water and as it was such a grand day for boating we then continued to moor for the night outside the tame Otter at Hopwas at 1630 hrs. A good days boating. 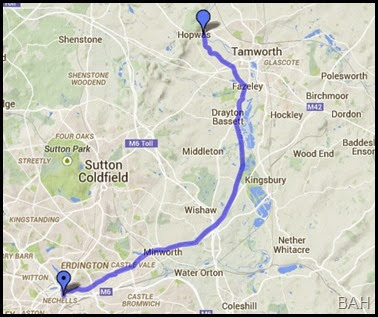