First to reply to a couple of points raised on yesterdays blog. There were a few mooring spots left on the rings at Westport when we passed, we were the first to arrive at the tunnel for today's transit but by 5 pm there were 4 boats waiting and this morning a 5th had turned up.
As correctly pointed out the mile post in the photo was not the one at the tunnel but one I had taken earlier with the writing in better condition. 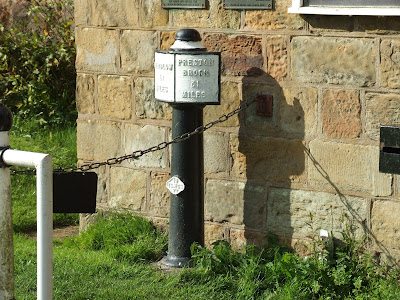 This morning we woke to rain, the first this trip, how much different to yesterday when the sun was shining and temperatures actually peaked at 20° C.  About twenty past eight there was a knock on the boat, it was the tunnel keeper who wanted to know if we were ready, we could get an early start and by eight thirty we were on our way. We were first in and I pulled well away from the following boat, in fact we had passed the 1100 Mtr. mark before the fans came on. I must say they were most welcome as the tunnel was getting quite warm, the mist cloud it produced hit me like a wall, it must be a bit disconcerting for people who are not aware that will be happening. By 9AM we were back out in the rain in the rich brown water of the northern summit. As we approached Hardings Wood Junction I could see a boat emerging from the off side chamber of Plants Lock, so a quick pip on the horn and a wave had the top gate left open ready for us. Once through the lock we pulled over and moored up so that we could visit Tesco for a few odds and ends, like food. Back onboard the rain had eased while we were shopping, In the next few months there should be a brand new Lidl just behind the Canal Tavern, a bit closer to the canal than Tesco. We set off down the locks and met a Volockie at Red Bull where we waited for a boat coming up, the Volockie accompanied them as they were short of time for an 1130 tunnel booking. Its good to see that C&RT are at last repairing one of the paired locks up here, I think it was Yew Tree Lock N0.44 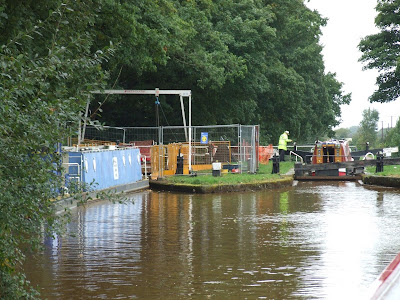 We were now following two other boats but the one directly in front was catching up to the one ahead. So when we came up behind three boats at Church Top Lock in the rain we decided it was time to pull over for lunch. May as well be stopped in the dry as standing holding a boat. Lunch wasn’t quite what was expected, the bread maker went wrong and the kneading paddle continued kneading all the way through the program so the bottom half of the loaf was a hollow blob, the loaf was round as it was rotating in the tin as it cooked. We still ate it with the homemade soup.

After a bit of a lull in the passing traffic a boat came up the flight and the rain eased so we set off,  only to find the first lock against us and a hire boat sitting on the off side between the two disused locks below so the afternoon was spent following them. Our planned stop for the night was Rode Heath, but all the moorings were taken so we reversed back from the winding hole through the bridge to moor on a nice straight, deep section about 150 yard south of bridge 140.

Today has been a day for thing not going quite right, it rained most of the day, the bread maker went wrong, the shove wouldn’t light, Memory Maps only recorded details of a third of our travels, the moorings were all taken in Rode Heath and the Mifi battery went flat, even though its on charge. 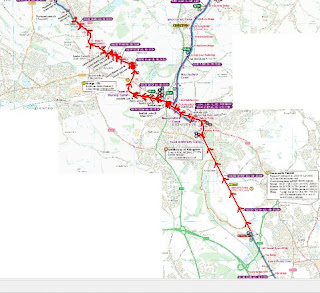