A pleasant evening last night on next doors boat chatting until about 11 pm. and then off to bed. I woke to the rain during the night which sounded quite heavy but had packed up by this morning. Our friends were off at 8 30 this morning but we didn't make a move until 10 30 am. We only planned to go as far as Braunston so it was just a slow chug meeting lots of boats on the way. 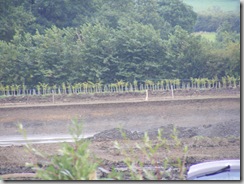 The Barby marina is coming on at quite a rate and we could see a lot of progress has been made in the last 3 weeks. They have even planted hedging and sown grass which to me seems a bit premature with all the heavy plant moving about the site. They are still advertising that it will be open in Autumn 2010 but even with the present rate of progress I doubt it. There is still a lot to do on site let alone the leak testing and breaking into the canal. I don't know if its on the BW stoppage list yet.
At Braunston Turn we turned left on to the Grand Union canal heading south. We only plan to go into the centre to turn and fill with water etc. before heading south (the opposite direction) up the Oxford canal tomorrow. Braunston looked pretty full but just past the junction we pulled along a boater we know who told us he was about to leave so we nipped into his space, since then several boats have departed and others arrived.
We were sitting in the boat having just finished our lunch when there was a knock on the boat. It turned out to be a couple who live in the next village to us, boat wise our paths have crossed several times but we have never actually met each other before.