Even though the barometer is falling and my weather station has black clouds we still woke to a bright sunny morning and set off backwards at quarter to ten,we only backed up to the junction where we turned up the 4 Stourton locks on the Stourbridge Canal. Just above the bottom lock there is what looks like an entrance to quite a large basin with boats moored in it. I had not realised it was there until last night when I was updating the Google map to show our position  ( http://tinyurl.com/Harnser-s-route ) 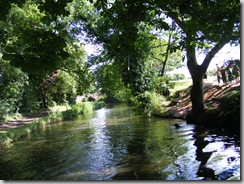 We followed the canal up to Wordsley Junction on the way we passed a group of children complete with swimming dog who were having a great time swinging out across the canal on a rope,I was a bit concerned as I approached them but they were no problem and stopped swinging before I arrived, all that wanted me to do was bip the horn and I happily obliged.
where we turned right and carried on to the end of the Town Arm.  We had planned to come here last night to moor but were advised against it. The basin is surrounded by a fence topped with razor wire that does not  give great confidence in the safety of the area. In side the basin are all long term 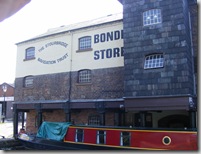 moorings and no visitor moorings at all,at the very end of the basin is the Trusts headquarters and a winding hole where we turned a little after mid day to retrace our steps to Stourton junction. We later found out from an acquaintance who had been moored there last night that if you enquire at the trusts headquarters if there is a space then they are very happy for you to stay.
We were back at Stourton Junction about twenty past two and again turned sharp right to carry on up the Staffs and Worcester canal. We met boats at most of the locks until  we reached Greensforge Lock which was not only against us but had the top gates open, Right in the middle of the lock landing was an elderly fisherman with two elderly ladies all sitting on their canvas folding chairs all over the towing path. He didn't look too impressed when I tied up right in front of him so he couldn't drowned his maggot. Just as we cleared the lock a hire boat pulled away just ahead of us so the rest of the afternoon was spent turning locks, to give them their due, they did empty one lock for us as they left which was very welcome. We followed them up the Botterham Staircase locks and as it was now 6 pm decided to call it a day.