Last night just as we got back to the boat from taking the dog out it started to rain, this gradually got heavier and we went to bed listening to it drumming on the roof. I got up during the night and the rain had stopped the sky was clear and the stars were out, this morning it was sunshine. We were right about it being quieter below Double Rail lock and we never heard the train once all the time we were there. Our walk with the dog took us up passed Double Rail lock where the top was open and the pound above down by the best part of a foot. I closed the gate and overnight the level recovered. The gate on this section of the GU tend to swing open after you leave the lock, in some cases they do that after you enter the lock as well, you just get to the top and look back to see the bottom wide open.
This morning we were away at 0945 hrs and met boats at both the first two locks, we pulled over at the services at Kilby Bridge to top up with water, we haven't spotted a water point since we passed here on Saturday afternoon. Just as we were leaving another boat came down and took our place so the omens are good for some locks being with us. In the end we met 9 boats coming down and apart for some locks that had partly filled they were all with us except the last one. 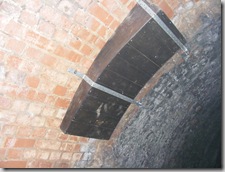 Around lunch time it started to rain and this continued for the rest of our journey so I was quite pleased to enter Saddington Tunnel. As we passed through I noticed some structures attached  to the roof and wondered if they are bat boxes, they seem to be situated about 300 yards 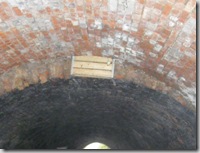 in from both ends of the tunnel.
We only had one area of concern as we made our way up the locks today and that was above Taylor's Turnover Lock where the pound was so low that the mud was exposed at the sides, maybe half a meter or so, but I kept to the middle and chugged slowly up to the next lock, Diana walked as its only a short pound so if I had of got stuck she could have let some water down. We moored for the night on the straight stretch of concrete  just to the south of Smeeton Aqueduct at 3 pm.

Sato Travel-very lovely and all post are very good