The dog decided that he would like to go out at 6 am this morning in the cold and dark. As I opened the front door I was aware of a keen frost with ice on the outside of the boat. When I returned to the boat I was unable to open the slide at it was frozen solid and Diana had to come and let me in.
When we got up it was bright sunshine but still decidedly chilly when we set off at 10 am. We made our way down to Debdale Wharf to fill up with diesel at 68 p/lt and to have a chat with John the boat painter about redoing our roof for us early next year. While we were there we also had a coffee with friends on their boat in the marina and introduce ourselves to the owner of nb.Lilly Pad.  Once this was all done we were on our way again and heading for Foxton Locks. Diana went up the flight to find the lock keeper to book our place in the queue,there were no other boats waiting at the bottom and one had just gone up the first lock.
There is a new sign post at 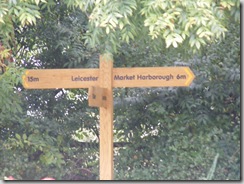 the junction, the strange thing is that it says its 15 miles to Leicester. There was a GU mile post right beside where we moored last night at Smeeton Aqueduct saying that it was 15 miles to Leicester from there as well, but the 2 signs are about an hours cruise apart. I think there is a cast iron mile post adjacent to the new wooden one that says its 18 1/2 miles to Leicester, so which one is right.
Diana returned and we were clear to follow up the flight,after about 3 locks a family with 2 small girls came along and opened and closed all the offside gates for us, which saved me walking up to open it and Diana crossing the bridge to close it. When we reached the top there were 3 boats waiting to come down so our timing was spot on.
We carried on it the bright sunshine which at times made it almost impossible to see if anything was coming towards us as it got lower in the sky and shining straight  along the cut into our eyes. Passing through Husbands Bosworth tunnel Diana was steering and I was standing on the front deck examining the inside of the tunnel, although this tunnel has no ventilation shafts there are several borings in the roof of about 2" diameter, some of which had water running from them. As it was such a pleasant afternoon we carried on until a few minuets to six when we moored for the night just before bridge 27 by Yelvertoft Fieldside Covert.