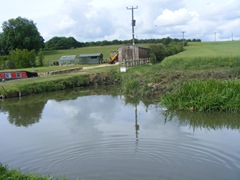 Last night the owner of the wharf opposite dredged the winding hole out with his digger, he was probably at it for a couple of hours so hopefully boaters who try to turn there in the future will find things mush easier.

I also walked up on to the bridge where I found this old weight restriction notice on the south parapet wall, it is a shame that one of the voluntary canal groups can’t give it a quick coat of black and white paint.

The canal south of Banbury is much quieter than between Banbury and Braunston. We met our first boat as we were filling Kings Sutton lock, it was a shame they didn’t arrive 5 minutes earlier as it would have saved us filling the lock, but at least we could leave it empty. 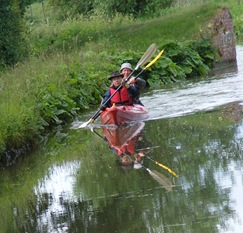 The next boat we met was this couple in their canoe who as they put it were out for a constitutional paddle. They went as far as Kings Sutton lock and then returned to Nell Bridge overtaking us on the way. By the time we arrived at Nell Bridge there was no sign of them. 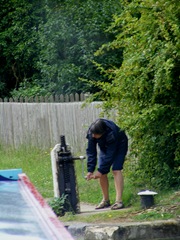 bottom gates so I let Diana off before pulling back on to the lock moorings. Once the oncoming boat was in the lock the lady rapidly wound her near side paddle up, so Diana followed suit with the offside one. Sir on the helm seemed quite happy with this and was a local boater, but one of the results was a large plume of fine mist coming up from the paddle gear. I saw it with the lady drawing hers and manage to photograph it when on Diana’s side.

We had a morning of showers and as we approached Chisnell Lift bridge is started raining quite heavily, as it was  lunch time we decided to pull over for a bit while we had something to eat and wait for the shower to blow over.

After lunch we moved off and had very little more rain, the down side was that we left just after a single hander who was moored on the other side of the bridge so ended up following for the rest of the day and before anyone jumps in, yes we did help him by opening the bottom gates and closing up after him.
Most of Oxfordshire Narrowboats were out and there was a crew waiting to set off on one of the few remaining boats. We caught up with our single hander and the last hire boat to leave at Dashwood lock where they were receiving their tuition before continuing south. We continued on to just through bridge 212 between Northbrook and Pigeon locks mooring up at quarter to seven.