We started slightly earlier than usual. We moored just below the lock moorings last night and just as Diana was taking Magic out two boats came by, so I walked up to help the first one through, once they were on their way up Diana came back with the dog and I said to the second boat I better join the back of the queue, to which he offered me his turn so he could sit and eat his breakfast.
As we left the lock and thanked him the hotel pair turned up and they in turn followed him up. We continued on to Banbury where Diana made a quick visit to Morrison’s before we continued on to the town moorings, as I pulled in at Town Lock the hotel pair pulled in to the services, I would guess they fill their tanks every day.
We moored in the town to go for a Fathers Day lunch with my daughter, her husband and his parents and my grand daughter.

The town was empty of boats with only 4 on the visitor moorings in the centre of town and 1 on the moorings opposite Sovereign Narrowboats. 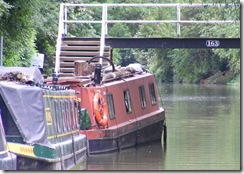 There are only half a dozen boats on the Spice ball Park moorings but there is still one with his bows half way out under the foot bridge. We had a steady run from Banbury through to Cropredy meeting boats near each lock so gates were open of locks empty which eased our passage.
We had a chat with the chap who owns the lock cottage at Bourton Lock, someone smashed his front door in last week and stole his solar panels which hasn’t helped him. I would think the 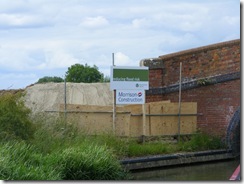 best thing he can do is move in as soon as possible. There is major earth works going on around the back of his cottage where that are building the Banbury flood relief scheme, This will be a large, normally dry reservoir that will be able to hold flash floods coming down the Cherwell and releasing them in a controlled manor. The pond through Cropredy was down by about 6”, better than when we came down, lots of the visitor moorings were free when we arrived at 6 pm but have filled up since, we weren’t able to get anywhere near with the first spot we tried, but now the bow is against the towing path and the back is not to far out. 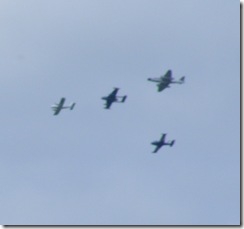 I only managed one aeroplane photograph today and it was only a quick shot on the bend, coming out of Banbury with a hire boat coming the other way, so its not a clear as some of the others I have posted, but hopefully you will be able to identify them.