A late start today as a bit of shopping was called for to replenish stocks of fresh fruit and veg plus some bread flour.  By the time we set off at 1130 AM it was a steady drizzle and very overcast 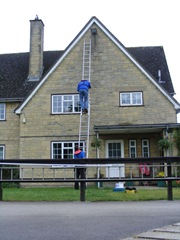 At St. Johns lock they had a couple of electricians working on the lock keepers outside light. EA rules require all contractors on site to wear a lifejacket, so these two were in the garden and up a ladder wearing lifejackets. I wonder it they would have needed them if they had been installing a new cooker?

Today has been the busiest we have experienced so far this trip and in our short day we have met some 25 boats, mostly Narrowboats but one wide beam and one inflatable. We did manage to meet a hire Narrowboat on a right angle bend and they were hard on the wrong side which lead to a bit of smoke from the exhaust as we stopped while running down stream. There is hardly any flow on the river at all but it still makes a marked difference to your progress once you are going down hill again. 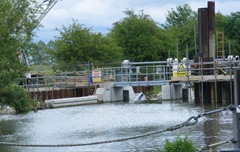 Yesterday I posted that there was work going on at Radcot Lock weir, I managed to get a better photo of it as we came down stream today 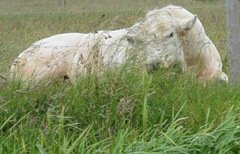 I also managed to get a photo of the large bull we saw yesterday who was all by himself in the field, all the others we have seen have been with herds of cows.  This chap was a monster compared to them, unfortunately he was just laying about to you don’t see him in his full glory. 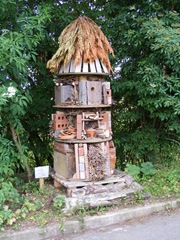 There is a rather interesting structure at Shifford lock called “The Shifford Lock Insect Lodge” I don’t know who was responsible for it but its quite a grand structure, I hope the intended occupants enjoy living there.

We had to work a couple of locks ourselves as we caught them at lunch time and a 5 pm we moored against a concrete edge at Morton about half a mile above Harts foot bridge, no sooner had we tied up and magic hopped off than he found a dog biscuit on the path, a niece little bone shaped one.

Can be hard for supplies this end of the river. there is a free bus service from lechlade think but not sure it is on friday and will take you to planet tesco

i forgot to add... don't feel sorry for the bull. when we passed him on the way up, he was in amongst a herd of cows, doing what bulls do. so he is probably just taking it easy after all the exercise.. :)