We were awake early for us so set off earlier than planned, we were off by 9 30 am on a reasonable morning without a breath of wind. The nights are cooling down now so everywhere is wet in the morning from the dew, this morning when I looked out there was mist rising from the canal.

Our first stop was at Lower Heyford to fill with water, when we arrived there was a boat already on the water point with the hose connected but the valve in the upright position, so I gave him a call and asked if he had finished filling. Turns out the leaver is 90 deg. out and upright is on, not pointing to the water outlet as normal. He said he wished it was finished as he had things to do, but the tap was very slow. Turned out he had been there an hour and then we waited 40 minutes for him to finish before we could start. Once we were almost full we set off as by now there was another boater waiting to use the tap, we can fill again tomorrow in Banbury.

Now the weather is turning boaters are getting their fires going, 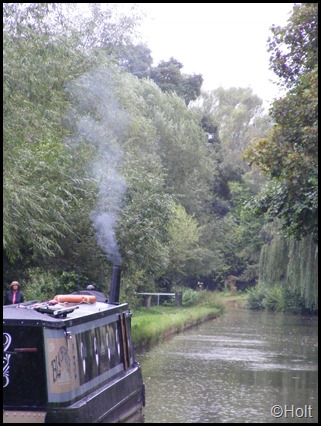 as you can see by now it was chucking it down.
We haven’t need any extra heat yet as we have an engine in an engine room and the heat from that spreads right through the boat, something we could do without in the hot weather.

For some reason the chain used to pull up Heyford Lift bridge has changed arms and the one its on now is not so ergonomic to hold down as the old one.When we got to Somerton Deep Lock there was bit of a queue and a Day Boat was trying to turn round. It seems they couldn’t get the bottom gate fully open to allow another day boat to leave. When we moored up the chap at the front or the queue returned with his keb, he had been down on the day boat trying to clear behind the gate to let it open fully without any luck, so the plan was fill the lock, the day boat would back out, empty the lock and the chap at the front would try to get in and clear it some more. With him pushing forward with a JP3  engine and us wriggling the gate he finally got in, had a rack around and gave it bit of a blast with his prop. The day boat then came down and squeezed through with us again wriggling the gate. The other day boat that was waiting below the lock also decided to turn and head back to Heyford so it was my turn to go in. Harnser must be a bit narrower as I slipped in without a problem, but I held back against the bottom gate before giving full power with the rudder her over to the left this forced lots of water around behind the gate in the gate recess and on full rudder I have very little forward propulsion so didn’t shoot down the lock. I then locked up. The next boat came down and while the lock was finishing to empty he also poked around in the door recess with his pole. When the lock was empty  the gate opened fully, something I have never seen before and he was able to continue on his way. We just checked that the last boat waiting to come up was OK and then made our way to Aynho for the night.
When we arrived at Aynho both the spaces on the visitor moorings before the bridge were free so us and the other boat that was stuck below the lock had room to moor.
What should have been about 4 hours boating took us 6½ hours. 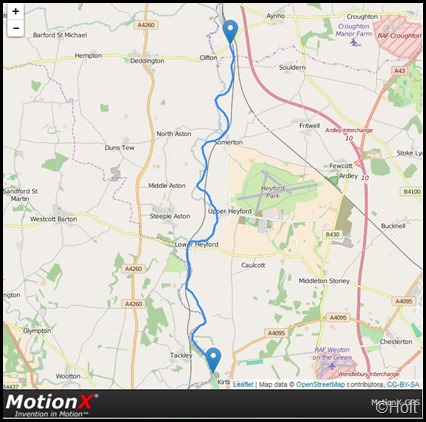 Biggest problem with gates is fenders stuck behind them.

Yes there was one of them Maffi