For some reason the chap who moored directly behind us last night started his engine around 7am this morning not leaving until 8-30am. there were only 3 of us moored here last night, if he wanted to fire up early why not moor at the other end of the moorings alone.

We made the normal 10am. start just going about 100 yards to the water point where we sat for a good half hour while the tank filled before proceeding through the lock and hard right onto the Coventry canal. It was a lot cooler this morning requiring a coat in place of sun tan lotion. As we made our way along the Coventry Canal a boat was catching up to us, as we were in no hurry I pulled over and waved him passed, we in turn passed in in 500 yards as he was only going to Charity Dock for blacking. As we passed I photographed the cartoon cutouts that have appeared since our last trip.

It wasn't far past here where I spotted a Blackbird with a white collar round its neck, apparently you often get Blackbirds with some white feathers. 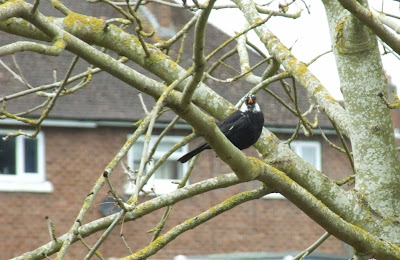 It's interesting to see what some people do with their gardens, some grass them all over, one we passed was all gravel with some flower beds set into them, others just let them run wild. But just a few set them out to amuse others and I suppose themselves, like this one. 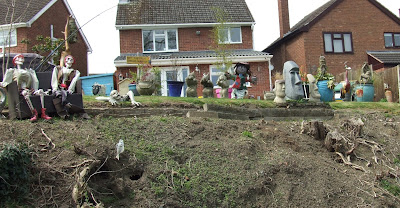 When I first saw this house looking up at the balcony had me quite puzzled and I wasn't sure what I was seeing, it really plaid tricks with my brain. Now knowing what it is it still plays the same trick. 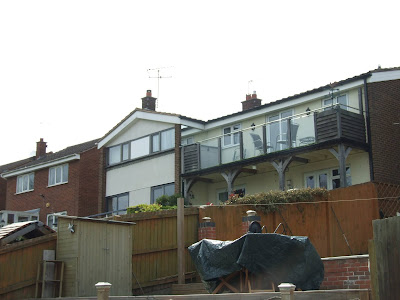 It's actually a mirror mounted at the end of the balcony against the side of the gable end above the locker. I am not sure I would like it on my balcony, but I am not that keen on looking at myself.

When we came through the other day there was a rather laid back dog just watching the world go by from his chair, ignoring  any one or thing passing him. I did photograph him but it was too out of focus to post, he was in the same spot and pose today. 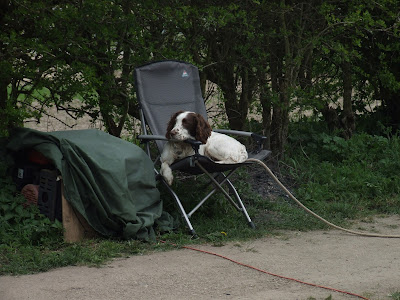 We pushed on a bit further passed Hartshill maintenance yard and Sarval pet food manufacturers, it didn't smell as bad as it sometimes does to  moor in the sunshine at Mancetter opposite a very large field of sheep and lambs, I hope they don't snore. 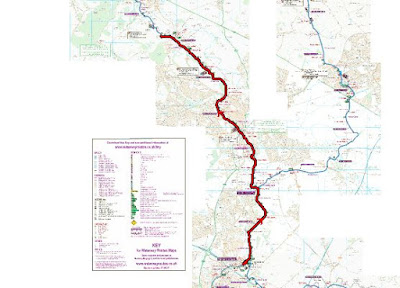 Brian I can only assume you are confused in thinking everyone is considerate :-) I would have thought the pandemic would have reminded you there is a portion of humanity that are selfish and inconsiderate. Some of these people own boats!