I am always surprised how quiet it is moored in the centre of Banbury, after about 8 pm we didn't hear hardly anything, people, traffic, animals, nothing. Likewise this morning, no early morning hustle and bustle, joggers, dog walkers, just piece and quite. 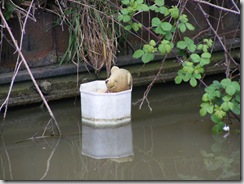 had a gentle chug down to the winding hole, on the way I spotted this chap with no sign of a licence on display, not having a roof or engine I suppose he wouldn't need a BSS cert.

The winding hole below Banbury is a bit tighter on the mouth than most and leading into what could almost be described as a very short branch, we got round without to much bother, not one of my best manoeuvres and headed back up to the lock. When we arrived there was a boat waiting on the towing path, one on the services and one about to come out of the lock. After the boat left the lock the only movement was the boat on the towing path side adjusting his ropes. I enquired as to whether he was intending to go into the lock, his reply was the chap at the services was next. The chap at the services said he was about to fill his water tank and would be some time, so the first chap said he wasn't in any hurry and would probably moor in town so I might as well go first. 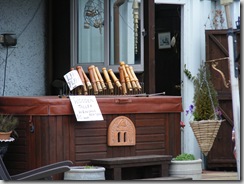 The house by the temporary bridge, between Hardwick lock and  Tesco's , now makes and sells wooden tiller ends as well as tiller holders, the price looks very reasonable and there are several designs to choose from.

We met a few boats between here and Cropredy where we managed to overtake two of the three ahead of us when they stopped for shopping and water and the third one who moored just above Cropredy lock, we are out in front, all locks will be ours (we think).
Just above Broadmoor Lock we saw the award winning journalist, Steve Haywood, working hard cleaning his boat down so we pulled over for a few minutes to start putting the world right, but moved on when the boat following came out of the lock.
We continued our clean run of locks right into the Claydon flight, where it all went wrong and they were all against us. We didn't see the boat ahead until the second from top lock where we caught them up and that was the only pound in which we met a boat. 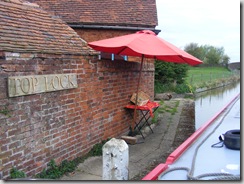 As we left the flight there was just one pack of cup cakes left for sale and with great willpower we resisted them and moved on a couple of hundred meters to moor for the night at 4-30 pm. just through bridge 144.

nice photo of the floating teddy. wonder where he's off to ? :)