We arrived at the boat yesterday a little before p.m.. yesterday and moved down to the top lock to load up from the car, we then backed up and moored opposite our home moorings.
We went down to The Folly for dinner; it was not so busy as last time we visited. The menu had changed a bit since the last visit and we both had the chicken & Mushroom pie, which was very good.
They are still unable to take credit and debit cards as they are waiting for the machine to arrive.

Before we set this morning we did a bit of shopping so it was almost midday before we made the top lock. There was a steady flow of traffic but no queues and we only turned a couple of locks.

Once clear of the flight we didn't meet another boat until we reached Napton Narrowboats. 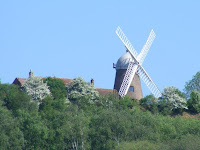 The view of the windmill on the hill was very good with the way the light was striking it. 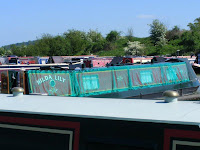 One of the boats in the Napton marina was covered on one side with green netting, I can only think it was to keep the sun off.

On the towing path opposite Napton Narrowboats there was a Green Plover just sitting in the afternoon sun. I suspect it may have been nesting nearby as it took off and swooped around us quite closely several times as we passed.


We turned hard left at Wigrams Turn and moored for the night just before Calcutt top lock in warm bright sunshine.

I waited until things cooled down a bit and then set about some of the rust spots on the rear end of the roof, but its an uphill struggle as the more I sanded the more paint fell off. The only real answer is to sand it all off and start again, but I don't intend to do that, so its just a few more patches coming up.
I took a wander to Calcutt Marina to buy a new pressure cap for the header tank as the old one has fallen apart, I don't know how well it will work as its 7psi where as the old one 13 psi.

As the evening wore on we were treated to a glorious sunset over the reservoir. 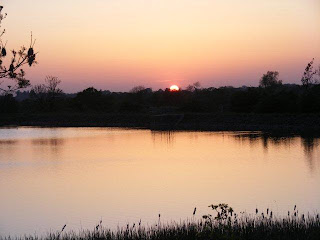