Last night we visited The Folly to eat but they were full to the seams, its the busiest I have seen the place for many years, unfortunately it was so busy we went back to the boat to eat.

During the night the wind died away the barometer has been rising steadily leading to a fine but mainly overcast day. We didn’t set off until 11 am by which time most of the other boats around us had departed, I heard the first go well before we got up. 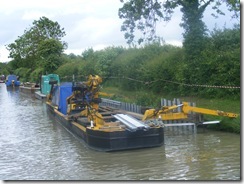 BW are hard at work (well the equipment is all there) repiling the towing path just to the north of the winding hole. This section has been eroding at a tremendous rate over the past couple of years and has been fenced off with no mooring signs for the last year. 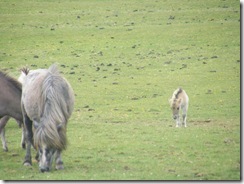 We saw several small foals below the windmill with their short, spikey manes, looking like something left over from the crew-cut days.

The canal was quite quiet and as we approached  bridge 102 I was aware of a cruiser coming up behind me, he followed me through bridge 101, not to close and round the sharp bends, I held well over in case he wanted to come past and as we cleared the second bend by the old railway bridge he shot passed  us, between us and the moored boat I had slowed right down for and didn’t even acknowledge I existed. The moored boat rocked about a bit with the swell, we he had to pass quickly as there was another narrow boat coming the other way at the time.

We continued on into Braunston going down to the Marina entrance to wind. Some people have obviously missed the entrance big time as can be seen by all the missing bricks on the east entrance wall. Once turned round we retraced our steps hoping to moor opposite The Boat House, but by now both spaces had been taken and we pulled in just through bridge 91, however we had hardly tied up when a hire boat left the moorings right outside The Boat House and as we intend to eat here tonight we swiftly moved over into the spot they had vacated shortly after 2pm.

Since we have been here the sun has come out and its got quite warm, the canal is reasonably busy and most of the boats moored on the towing path opposite the pub have left to be replaced by new arrivals, I expect they had just stopped for lunch.