Last night just after we had gone to bed we could hear the rain of the roof but it didn’t amount to much, however the wind picked up quite a bit and the boat banged the hard edging a few times in spite of the fenders being down.

We set off this morning at quarter past ten, if was a bit warmer than the past couple of mornings but still breezy. We met quite a few boats one right under bridge 17 which has a narrow twisting approach from the north, luckily it was a hire boat with a steerer who did backwards. 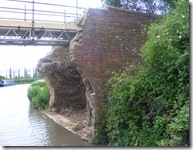 We passed under the remains of the bridge leading to The Rose and Castle public house, this has recently been partly demolished by the brewery as it had been deemed unsafe. They have removed the main arch over the canal but the side pieces are still standing 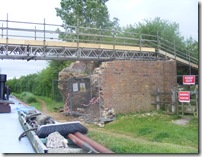 with a scaffold bridge spanning the cut. I think this is so the workman can access both sides as its covered with danger, keep off notices. I don’t know if they will require a further stoppage to complete the work, but I would not be surprised considering how close it is to the canal.

We had just passed through Ansty and under the M69 when we spotted a small goat with its head stuck through the stock fencing. It was to shallow to get the boat over so that I could get ashore to rescue it, but then a chap walked his dog by on the towing path and when I explained the problem said he would ring the farm when he got home.

We continued heading towards Hawkesbury Junction when we met nb.Copperkins II with friends of ours on board. I slipped into reverse and was silently congratulating my self what a neat manoeuvre it was and looking at the other boat, what I didn’t notice until to late was that the stern was slowly drifting into the offside bank, where I picked up the biggest blade full of willow root which after spinning round the prop was like an old piece of rope, it must have taken a good 30 minutes to cut it all away with a Stanley knife and drag it out, about half a bucket full in all.

The moorings in Hawkesbury were all full so we continued on through the lock dropping all of 9”. It is interesting that this lock like all other BW locks has a cill marking, a notice to tell you to keep ahead of the cill and a safety ladder to climb up if you fall in while the lock is at the lower level, as I said 9”. From here it is a very hard right turn 360 deg. onto the Coventry Canal running parallel with the lock we just left. We continued along the Coventry Canal for about two and a half miles, passed Charity Dock where the manikins have had a change of clothes since we last came this way and to Marston Junction where the Ashby Canal joins the Coventry canal. We turned round at the junction and started to retrace our steps as far as Bedworth where we stopped of to see friends for tea and delicious Apple Cake. We stayed with them rather longer than we should and I hope diner wasn’t spoilt because of us. We pushed off to find a mooring for the night at Sutton Stop, but no chance, nose to tail boats long the Coventry and the Oxford as far as the old power station and we didn’t fancy mooring opposite that so we carried on passed The Elephant and Castle to moor about 300 yards before the 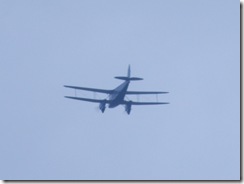 Coventry Cruising Club. As we made our way along the Oxford this twin engined bi plane  passed over us and I just had time to get the camera for this quick shot. You can’t see it very well in this shot but from below it has very slender wings.

The aircraft is a DeHavilland Dragon Rapiede, a 1930's aircraft, see - http://en.wikipedia.org/wiki/De_Havilland_Dragon_Rapide

Brian, The Aircraft is a DH89 De Havilland Dragon Rapide. Check it out here -

There was an earlier DH86 with squared ends to the wings and a 4 engined version in Australia.
nbJubilee.

Brian, The Rapide is based at Coventry and was flying to Blackpool. My mother (87) and my brother had booked a ride on her and went yesterday. How is that for coincidence?

Thanks for all the replies and the link