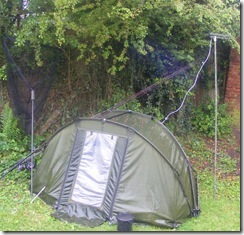 Last night there were 2 fishermen set up for the night just through the next bridge complete with bivvie. When we passed them this morning it was all zipped up, the rods stood up and no sign of life so they were probably getting a bit of sleep, but what did strike me was they had a TV aerial erected on it.

Last nights moorings were quite close to the motorway and although the noise was not to intrusive we could hear it. When we woke this morning it was raining steadily and we could not hear the motorway at all, by the time se set off it was still raining, it rained all day, but again we could hear the traffic, so I don’t know if something happened that caused the motorway to stop for an hour or so 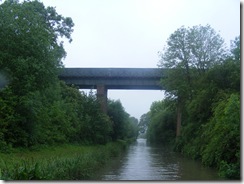 built, there must be a good 30 feet clearance under it and it crosses both the canal and the railway, it looks a bit like a railway bridge or an aqueduct with what looks like a trough on a flat metal deck. I discounted aqueduct as its at least 30 ft. above most of the surrounding land.

We turned into Lime Farm Marina to fill with diesel, I think they are the cheapest in the area at 82p and tied up. I had enquired on our way north if they would be open today and John said it would be late afternoon as he was off to Crick, so we settled in for a long wait with a cup of tea. I just got all my wet clothes off and the tea in my hand when John walked up, he hadn’t even been to Crick yet  so I was soon £137 poorer and on my way again.
As we approached Hillmorton locks a boat on the water point waved me in behind him and said “There is a queue because there is only one lock working” Diana and his wife both walked up with windlasses in hand and guess what, both locks were fine but everyone had been using just one as someone had said one was broken, this got things moving a bit and we were soon on our way. We had heard the boat ahead go by this morning, he has a twin cylinder Gardener that is only firing on one and is on his way to Tony Rendshaw’s to get it looked at. We didn’t meet any boats in the flight which speeded things up a bit but we did start meeting boats before The Royal Oak, so they had the whole flight with them. Its not possible to moor outside the pub now as its all used by Armada Hire Boats.
By the time we reached the Barby straight we had caught up with the boat with the sick engine, it didn’t matter as we were only going at tick over speed passed all the moored boat and I managed to get a couple of photos of the new marina, work has definitely moved on but there is still a long way to go.

Its a shame they left their tools out in the rain.

Just after this the boat ahead pulled over and waved us and the boat following us passed as they were conscious of holding people up, by now it had turned 6 p.m. and the weather was brightening, we carried on to just before Willoughby road bridge, the boat behind pulled in a short way ahead of us and then a little later the boat with a sick engine turned up to moor between us, all this was being watched by the cows opposite. 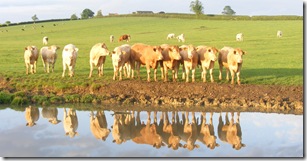 Re the bridge, look on Google Earth, you will find that its a road bridge taking Brinklow Road over the cutting, & its not above the land, its level with it ! Its deceptive from the cut, thanks for mentioning it though, as I've wondered what it was for as well, you spured me into action !!

Apparently, they're due to start filling the new marina with water on 10 June, and it should be open in July.