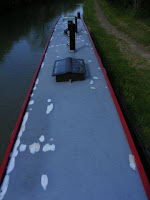 As planned this morning was spent changing all the white blobs from yesterday into grey ones, and as you can see there were several of them.

We walked the dog up passed Welsh Road Lock where this strange craft is moored, its been in 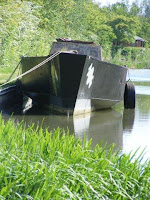 the area for a couple of years now and I think its an ex navigation buoy. I do wonder how stable it is to walk around on as the section of hull in the water is very narrow, maybe only 3-4 feet, the main belly is actually above the surface. It is displaying a BW licence in one of the very small portholes but I would be surprised it ties in with the registration number on the superstructure which is quite old, but then it may be the original superstructure with a new hull?
After lunch we made a move and took a slow run up to Long Itchington to moor just north of where we were at the weekend on the few mooring rings installed along that stretch. 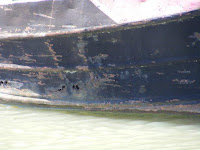 Just prior to the moorings we passed a moored boat with the hull so thin there are actually holes in it, if its like this above the water line I wonder what its like under the surface where you can’t see it.
While we were moored here I gave the roof patches another coat of none slip grey, its not meant to be none slip, but there has been so much rubbish blowing about that its quite rough, but at least it’s the right colour. I also fitted a new aerial for the car radio in the bedroom, but the reception is still as bad as ever.

This evening we went to eat at the Buck and Bell, probably the most expensive meal I have had in a pub but very good, I would defiantly go again. We walked back to the boat across the fields, leaving the footpath about half way to return to the towing path 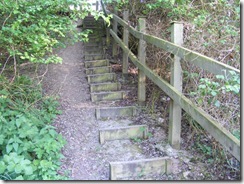 by the aqueduct where the sign says ”Access for BW only” I would love to know who did the design and supervision of the steps cut into the steep bank. The wooden edges to the steps in most cases have no back fill at all and if it is supposed to give a safe access and egress for BW employees who fills in the risk assessment when they visit the aqueduct. 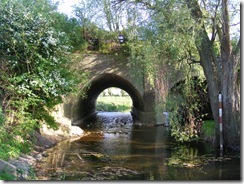 Brian, just a warning that by putting a UK Waterways Site button on each post, you've ended up with seven on your blog front page -- and that's against the rules. You should only have one on show, otherwise each visitor counts seven times!

Do you know, we walked up from the canal, straight through the village & up the hill & never saw the church!!

Thanks Adam,
Its since Live Writer went AWOL I have been posting straight via the blogger software and it was just sitting there on the first line, so I didnt realise what was happening.
I will remove it straight a way.