Well if last night was bright and clear this morning was just the opposite. When I looked out of the back doors at about 9 am the visibility was about 100 yards. 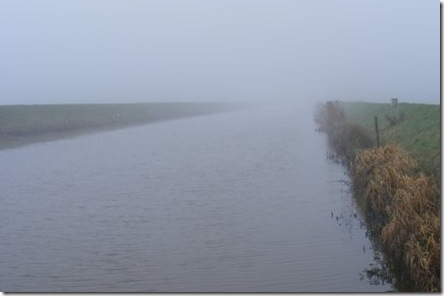 As we had to drive home we decided just to stay put until it started to Clear at about 11 am.
Last night I was surmised how clearly we could hear the trains going by, the frequency dropped off after we had gone to bed so didn't disturb our night. However this morning in the fog we could barely hear the trains go by.
The fog started to lift quite fast and the sun even started to peep through for a short time. At the end of the Twenty Foot River we passed under the bridge at Angle Corner 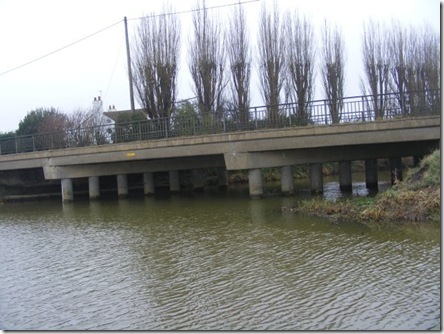 and turned very sharp left heading east. By now the water levels were even lower than they were yesterday and I found the going quite slow for a bit. About an hour later we joined the old course of the River Nene where it came down from Benwick the same stretch we we on 4 days ago. Another thirty minuets and we were turning into our moorings, we have been cruising for 4 days around about half the Middle Level and not seen a single boat on the move.
Once moored up I set to draining the water system down in readiness of the big freeze that is forecast for next week.

On our way home we decided to call in at Salters Lode discuss with Paul, the lock keeper the possibilities of crossing to Denver some time in the next month. He suggested we go and look at the other side of the lock to see the situation for our selves, what we saw did nothing to add to our confidence for making a crossing. The silt outside the lock is now all the way across the mouth of the lock from side to side, there is no way that we will get out of there until after it has been dredged.
Posted by ************** Brian and Diana on NB Harnser******** Maps by https://www.waterwayroutes.co.uk at 23:14

Thank you for taking so much trouble with your trip reports. I used to have a boat on the narrow canals in the Midlands. The Fens are so different and fascinating.

Thanks for taking so much trouble with the pictures and text of your trip reports. I find the Fens fascinating.